Standard White - 100%
“Whether you're - off the record - planning a military coup or just looking for an extravagant party entrance, rappelling from the belly of the Annihilator can be as stealthy or showy as you choose.”

The aircraft resembles the stealth prototype of the Sikorsky UH-60 Black Hawk, giving the characteristic shape and overall design.

The aircraft is essentially a stealth-modified variant of the Annihilator, sharing a similar profile and layout. The nose and cabin of the aircraft features an angular profile similar to the Akula and a sighting unit in place of the Annihilator's searchlight/camera, as well as folding stub wings and lower undercarriage compartments. The middle section of the fuselage is tall and wide, with the corresponding engine vents, side doors and access steps, as well as a noise reduction rotor-hub on the main rotor. The tail boom features a similar empennage to the regular Annihilator, but the tail rotor is also fitted with a noise reduction rotor-hub and a lower compartment for the tail landing gear. The aircraft is seen with various military markings around the fuselage, including "United States Army" and "Marines" decals on the tail boom and rear doors, respectively.

The interior is similar to the regular Annihilator, with the dials being the same "Flyer" dial set from most basic aircraft. It also shares the same layout as the aforementioned vehicle, the Valkyrie and the Valkyrie MOD.0.

The vehicle can be painted with a primary color for the entire body and a secondary color for part of the nose and the lower surfaces of the fuselage, tail boom and horizontal fins. It uses a set of plain industrial wheels that are similar to the ones from aircraft such as the Cuban 800 and the Velum, albeit with a detail on the center that is different from those of the Titan and the Hydra.

The vehicle is equipped with two Miniguns on the folding stub wings, which resemble 20mm M197 Vulcan gatling guns. It can also have additional stub wings to carry missile pods (if equipped with a secondary weapon). 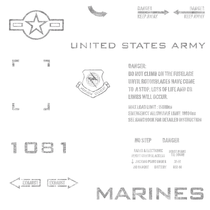 The aircraft performs similarly to the regular Annihilator, being slow and heavy to handle, but is generally stable at flight. Similarly to the Annihilator, it has a carrying capacity of two occupants in the cabin and four in the hold, the latter able to rappel down when the helicopter is steady at lower altitudes.

Like most aircraft, the Annihilator Stealth is powered by two turboshaft engines, emitting the same rotor sound as the regular Annihilator and most regular helicopters. However, it has a much quieter sound, barely heard with the radio on and having lesser noise range for other players.

The Annihilator Stealth's durability is identical to other civilian helicopters, requiring only a single homing rocket to destroy the vehicle or seven explosive rounds from the Heavy Sniper Mk II. Against small arms fire, the Annihilator Stealth will quickly begin to smoke when exposed to constant gunfire and will quickly shut down and lose power to the engines with sufficient damage, being a poor choice against most attack helicopters, such as the Buzzard Attack Chopper and the Savage.

The most notable feature of the vehicle is its stealth mode identical to the Akula, which allows the entire crew to navigate around the map without being spotted by enemy radars, making it useful for surprise attacks and getaways. Enabling stealth mode also reduces the pilot's wanted level to 2 stars if the pilot has 3 or more stars. However, its weapons are disabled for the pilot and the rear passengers during the stealth mode. In addition, cloaking the Annihilator Stealth does not protect it from a Galaxy Super Yacht's defense system, the Weazel News TV spectator channel or being spotted by the Orbital Cannon surveillance system. Also, most homing weapons are still able to lock onto it. Combined with the lack of countermeasures, the pilot must be careful or skillful enough to dodge enemy missiles.

Passengers can use the Flare Gun to redirect rockets that are locked on to the Annihilator Stealth, if timed properly, however.

When stealth mode is enabled, it will hide the aircraft from the minimap along with all items carried by the occupants, an ability also shared with the Akula. These include:

Like the Akula, the Annihilator features an array of weapons available for use by the pilot:

Official screenshot of the Annihilator Stealth. 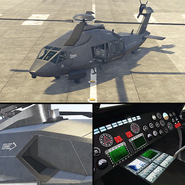