An Annihilator in GTA Online.

"This classic four-bladed, twin-engine combat chopper has not only seen active duty in the Middle East, it's starred in 3 movies about the Middle East since it returned! The Annihilator is renowned for its stealth capabilities... as much as a huge black helicopter with 4 machine guns can ever be considered stealthy."
―ElitasTravel.com description.

In all its appearances, the Annihilator is based on the Sikorsky MH-60L Direct Action Penetrator. It features a black body with a yellow stripe along with decals (that change between GTA IV and GTA O) and is operated by the National Office of Security Enforcement and the Military. The helicopter comes with a set of 4 miniguns mounted on both stub wings (2 in each one) that can be operated by the pilot.

The Annihilator's design is also comparable to that of the Raindance in Grand Theft Auto: San Andreas, which is based on a variant of the real-life counterpart. It fills the attack helicopter role previously taken by the 3D Universe Hunter. The Annihilator is upgraded in The Lost and Damned and The Ballad of Gay Tony, where it moves more quickly and fires explosive rounds instead of the regular ones seen in Grand Theft Auto IV.

Also, its livery is modeled after the US Custom And Border Protection's Office Of CBP Air and Marine Colors.

Operated by the NOOSE (labeled as LC Patriotism And Immigration Authority) the Annihilator the only armed Law Enforcement Vehicle in the game. It is occasionally seen patrolling the skies above Liberty City in single player mode, often over the East Borough Bridge and Hickey Bridge.

Passengers can fire a rifle whether they are in the large passenger bay in the center of the chopper, or in the co-pilot's seat. However, this is very difficult, as the helicopter's speed and lack of steadiness will not aid in the accuracy of the weapon. Also, when a pistol or submachine gun is fired from the Annihilator's, it will usually not have the range to hit the target.

Visually, the Annihilator remains mostly the same as its GTA IV predecessor. It has gained some visual updates, like a red light that illuminates the passenger bay and a more detailed metal fuselage texture. There is also, like most helicopters, a nightvision camera that allows a co-pilot to look through.

The helicopter moves quicker than any other vehicle in GTA IV, but is more difficult to slow down as a result. An effective way to slow down is to stop accelerating, pull back, and accelerate once again with the L-Stick still held back, as opposed to simply reversing.

As said above, the Annihilator is armed with four side-mounted miniguns, which are difficult to aim and require reloading after prolonged fire, but are very devastating to people and vehicles alike, and are supplied with an infinite amount of ammunition, although they overheat after 100 rounds are fired, so the player would have to wait for two seconds or so before they can resume firing. Players can also use the spinning rotors as weapons as they will slice people who get caught in them and make the vehicles fly, along with chopping off parts of other helicopters, such as the tail. AI-Controlled Annihilators never use their miniguns, instead relying on two NOOSE Tactical Response Unit Officers seated on the two rounds to fire on the player with M4A1s.

The Annihilator, however, is very vulnerable to any large caliber weapons, including RPGs, assault rifles, or other Annihilators. The RPG can completely destroy the Annihilator, or blast its tail off, forcing it to spin out of control. Annihilators facing other Annihilator's can do the same, or they can shoot off the rotor, also causing a crash. Rifle users have the range and stopping power to potentially kill pilots and/or passengers. Patient snipers may also be able to pluck a pilot out of the sky with a headshot.

In The Lost and Damned, the Annihilator is given explosive shells, and the top speed is increased, albeit not very noticeably. The minigun rounds will destroy cars, trucks, motorcycles, and even other helicopters and enemies with only a few shots. However the rounds fired from the Annihilator cannot be visible in TLAD, making accurate shots harder, but the explosive rounds make up for the inaccurancy. When the explosive rounds, speed, and damage resistance are all put together, this equates to an extremely deadly vehicle, especially when facing an experienced pilot.

The Annihilator is very difficult to acquire in single player in TLAD, possibly because Johnny lacks flight qualifications for any type of aircraft (conversely, Niko knows how to fly helicopters from his time in the military and Luis has recently received a pilot's license). It cannot be seen parked on any of the helipads in the city. As a result, it can only be acquired with cheats, or by sniping an Annihilator pilot flying low enough so that the helicopter won't explode upon crashing. The Annihilator remains available in TLAD's Deathmatch and Team Deathmatch.

In The Ballad Of Gay Tony, the helicopter remains the same as TLAD's version, but this time it is easier to obtain during gameplay, occasionally spawning on the MeTV building or the LCPD station in Lower Easton. NOOSE may now employ the helicopter's miniguns in full effect to assault the player during the missions High Dive, Not So Fast, and For the Man Who Has Everything. However, during normal gameplay, they will not use the miniguns.

On the other hand, in terms of performance, it now differs a lot from its predecessor; the miniguns fire at a much faster rate and, thanks to now having a crosshair (like other armed aircraft in GTA V), it becomes much easier to aim and hit targets with them, but its still relatively ineffective at longer ranges. They are, like in IV, normal minigun rounds, instead of the explosive ones featured in the episodes, yet that doesn't make them any less deadly against enemies, whether on foot or in vehicles. Another advantage is the fact that it can now carry 2 more players, therefore being able to easily transport a team of 6 around the map. On the other hand, the Annihilator is now much slower, and feels even heavier to handle, being comparable to the Cargobob. This makes it hard to compete against the Buzzard or Savage, and makes it particularly vulnerable to the Homing Launcher, but the Annihilator remain a useful transport for crews.

Early pre-release render of the Annihilator in GTA IV, with an all-black body and a different weapon configuration.

A NOOSE-controlled Annihilator scouting for the wanted player in GTA IV. 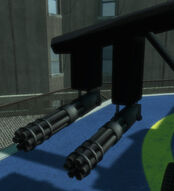 The miniguns on the Annihilator.

A group of Annihilators firing during For the Man Who Has Everything.
Add a photo to this gallery

Detail.
Add a photo to this gallery

Retrieved from "https://gta.fandom.com/wiki/Annihilator?oldid=816489"
Community content is available under CC-BY-SA unless otherwise noted.