“This classic four-bladed, twin-engine combat chopper has not only seen active duty in the Middle East, it's starred in 3 movies about the Middle East since it returned! The Annihilator is renowned for its stealth capabilities... as much as a huge black helicopter with 4 machine guns can ever be considered stealthy.”
— Elitás Travel description.

The Annihilator is based on the Sikorsky UH-60 Black Hawk helicopter, specifically the MH-60L Direct Action Penetrator version, judging by its stub wings, which is able to carry four mounted weapons on the same wings (two in each one). Its livery is modeled after the US Custom And Border Protection's Office Of CBP Air and Marine Colors. The Annihilator's design is also comparable to that of the Raindance in Grand Theft Auto: San Andreas, which is based on a variant of the real-life Black Hawk. It fills the attack helicopter role previously taken by the 3D Universe Hunter.

The aircraft is depicted with a rather large fuselage, having a rounded nose, a large cabin and large access doors, as well as a searchlight/camera fitted below the nose and the main undercarriage. The middle section of the fuselage is tall and wide, with large engine intakes/exhausts, side doors and access steps, as well as stub wings with the corresponding pylons and support frames. The tail boom features a large empennage with a wide stabilator (though it is always set in a cruise position), a tall vertical stabilizer and a tail rotor on the right side, while the underside has the corresponding tail landing gear with dual wheels. The helicopter bears yellow stripes with National Office of Security Enforcement markings around the fuselage, as well as LC Patriotism And Immigration Authority stencils on the tail boom and a registration code on the doors.

The interior is relatively large and features a wide instrument panel, along with a cut-out section leading to the rear bay. Like the Maverick and the Police Maverick, the rear passengers sit on the borders of the same bay and can use Assault Rifles.

The helicopter is only available in a black primary color, and uses a set of industrial wheels derived from vehicles like the Airtug, the Mule and the Benson.

The vehicle is armed with four Miniguns mounted on the pylons of the stub wings, which resemble M134 Miniguns.

The Annihilator returns in Grand Theft Auto Online with the same design and features as its GTA IV predecessor. However, it has gained some visual details, like a red light that illuminates the passenger bay and a more detailed metal fuselage texture. The front searchlight/camera can be used by the copilot to look through, like most helicopters. While retaining the same livery as in GTA IV, the registration code on the doors were removed and the stencils of the tail boom lack the "L.C." part. The interior of the aircraft remains identical to its previous iteration, but adds two additional seats on the rear bay. In the enhanced version, it uses a dedicated "Flyer" dial set also used on the Maverick and the Police Maverick. Again, the helicopter is only available in a black primary color, and retains the same wheel design as before.

The vehicle is still equipped with four miniguns, which in the enhanced version, rotate when using them.

The Annihilator has the highest speed of all helicopters and, possibly, any vehicle in GTA IV, as the player can reach to a destination quickly. However, it is difficult to slow down and somewhat hard to maneuvre due to its rather large design, especially when travelling through buildings and when landing onto a busy street. The Annihilator is upgraded in The Lost and Damned and The Ballad of Gay Tony, where it moves more quickly.

The aircraft is powered by twin turboshaft engines, evidenced by the intakes and exhausts seen on either side. It has a unique loud sound.

While having average resistance to collisions and its cab provides a slightly better protection from enemies on the ground, it is very vulnerable to Rocket Launchers, Assault Rifles or other Annihilators, especially on the upper side, where a single magazine from a Carbine Rifle can damage the vehicle enough to set them on fire and explode. A single rocket directly to the fuselage can completely destroy the Annihilator, while a rocket hitting the tail or the main rotor will blast it off or damage the helicopter severely, forcing the player to leave the vehicle before it explodes.

The Annihilator is equipped with four miniguns operated by the pilot, which have devastating firepower against pedestrians and vehicles. However, they are difficult to aim due to the lack of a reticle. While having an infinite amount of ammunition, they stop when 100 rounds are fired, so the player would have to wait for two seconds or so before they can resume firing.

In The Lost and Damned and The Ballad of Gay Tony, the miniguns are upgraded with explosive rounds, being even more devastating against most targets. However, the lack of bullet trail makes them even more difficult to aim.

The Annihilator differs a lot from its predecessor due to the upgraded aircraft mechanics in the game. In terms of performance, the Annihilator is much slower and feels even heavier to handle, being comparable to the Cargobob (as a result of an increased mass). However, unlike in GTA IV, that does not make the helicopter highly uncontrollable, even by travelling with the maximum forward pitch angle, apart that it is one of the steadiest when hovering, indicated by the airspeed indicator. As of the Smuggler's Run Update, rear passengers can rappel down the Annihilator, if the vehicle is held steady at a low altitude.

Again, the helicopter is powered by twin turboshaft engines, which produce a more traditional sound shared with most helicopters, such as the Maverick and the Frogger.

The Annihilator's low speed, sluggish handling and thin armour makes it hard to compete against most of the other armed aircraft within the game. The helicopter will be destroyed instantly from any standard explosive, but can withstand two to three hits from the Heavy Sniper Mk II equipped with explosive rounds. The helicopter's lock-on "hit box" has been moved lower, making all but hard tracking missiles, such as Deluxo, Ruiner 2000 and Stromberg missiles miss more frequently. The helicopter is also vulnerable to regular bullet damage, and will be destroyed in only ten rounds from the Heavy Sniper. With its poor maneuverability and large frame, the Annihilator is especially vulnerable to jets equipped with explosive rounds such as the Hydra or P-996 LAZER.

Machine Gun: The Annihilator is still equipped with four miniguns operated by the pilot as in its previous appearance. However, they fire at a much faster rate and aiming is somewhat easier thanks to the addition of a reticle, but they are reverted back to regular rounds instead of the explosive ones from Grand Theft Auto: Episodes from Liberty City. They can fire indefinitely without having to reload.

Despite having four miniguns, the weapons deal the same amount of damage as the Buzzard Attack Chopper's two miniguns, due to a damage buff the Buzzard received. The Annihilator's miniguns can fire up to a range of about 600 feet but have a larger split between the two sets of miniguns. Just like the Buzzard, the Annihilator can deal large amounts of damage when sustaining fire, but the weapons' firing paths do not converge, making hitting small targets with all four miniguns difficult.

Upon being converted into a personal aircraft, the Annihilator can only be repainted with a primary color, which covers all of the aircraft's body. The livery cannot be removed, however.

Early pre-release render of the Annihilator in GTA IV, with an all-black body and a different weapon configuration.

A NOOSE-controlled Annihilator scouting for the wanted player in GTA IV. 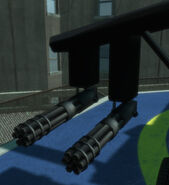 The miniguns on the Annihilator.

N.O.O.S.E officer firing fron an Annihilator during For the Man Who Has Everything.

An Annihilator at Sandy Shores Airfield.

The Annihilator on the updated Rockstar Games Social Club.

The Annihilator in the cinematic preview on Rockstar Games Social Club. 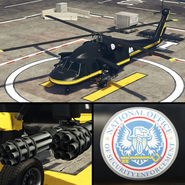 The Annihilator on Elitás Travel.

The Annihilator is very difficult to acquire in single player. It cannot be seen parked on any of the helipads in the city. As a result, it can only be acquired with cheats, or by sniping an Annihilator pilot flying low enough so that the helicopter won't explode upon crashing. The Annihilator remains available in TLAD's Deathmatch and Team Deathmatch.

Again, the helicopter is difficult to obtain. However, it can occasionally spawn on the same spots as in GTA IV, though in rare chances.