Anita is an actress, 1990s pop singer and choreographer who has become a judge on the Fame or Shame TV show. During the course of the show, she approves of Hugh Harrison's insults toward Lazlow Jones and simply considers it to be British humor. Anita mentions that Lazlow slept with an overweight woman in exchange for putting her through to the finals. Lazlow initially denies this, but confirms it immediately after.

She is most likely a parody of pop stars like Paula Abdul and Demi Lovato, whom have both judged on similar shows American Idol and The X Factor, respectively. 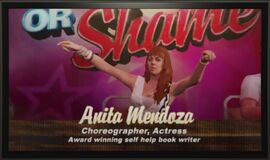 Mendoza as she appears on Fame or Shame. 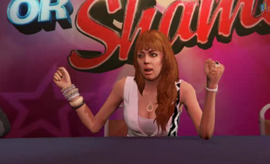