GTA Wiki
Register
Don't have an account?
Sign In
Advertisement
in: Gangs, Gangs in GTA IV, Gangs in The Lost and Damned,
and 4 more
English

View source
watch 02:34
Fire Emblem Warriors: Three Hopes - The Loop
Do you like this video?
Play Sound
This article is about the motorcycle club. For other uses, see Angel.

The Angels of Death patch

The Angels of Death MC is an outlaw motorcycle club operating in Algonquin, Liberty City where they frequently hang out at their clubhouse located in North Holland. They receive heroin from the Triads and deal Cocaine with the Spanish Lords. Similar to the relationship between the Albanian Mafia and the Ancelottis, the Angels of Death act as extra muscle for the Triads.

According to their official in-game website, angelsofdeathonline.com, the Angels of Death started in San Andreas in 1949 as a small riding club, later becoming a gang for "people dissatisfied with a non-segregated society". Despite officially denying it on their website, it is inferred there and by other characters that the Angels of Death are white supremacists.

The Angels of Death are identifiable by their distinctive back patch, featuring their signature "Winged Skull" with three rockers; a top rocker with the club name, a bottom rocker of the city (e.g. Liberty City, Los Santos), and an "MC" rocker placed just right of the skull. The gang's membership comprises of white males, often middle-aged or older. The Angels of Death dress like stereotypical bikers, wearing decorated leather or denim cuts, Perfecto-style leather jackets, red flannel shirts, gang T-shirts, bandannas, jeans or leather pants, and motorcycle boots. Common imagery on their clothing includes gang symbols, skulls, and Iron Crosses, a nod to both their biker lifestyle and white supremacist ideals. The Lost and Damned expands the appearances, including younger male members, and introducing old ladies, who often dress in a gothic style.

In Grand Theft Auto IV, they are operating around Beechwood City, and can be seen around the Burger Shot and basketball court there. They can also be found in BOABO.

In GTA IV's Multiplayer Mafiya Work mode, Kenny Petrovic reveals that the leader of the AoD organization (Lester Arnold) has a bike which he calls "Sexy Charlie," and then orders it to be destroyed.

In The Ballad of Gay Tony, Angels of Death members do not spawn in Beechwood City but they do in BOABO. They also spawn in North Holland, near their clubhouse and Northwood, near Luis' safehouse where they can be seen patrolling the streets and mingling with the residents, despite the fact that their turf does not extend to these areas.

The Angels of Death play no role in the storyline.

In Grand Theft Auto: Chinatown Wars, Hsin lists the Angels of Death as one potential suspect group for the sabotage of the Triads. He hires Lester Leroc to team up with Huang Lee to investigate. Lester attempts to infiltrate into the gang in order to obtain intel; however, the drugs and biking as part of the admission test is overwhelming for him, thus Huang assists by taking over on the biking stunts, attacking The Lost Brotherhood members and selling drugs. However, after having sex with Meredith, the Angels of Death leader's girlfriend, he learns that the gang was not involved in the Triads' sabotage.

During a random event with either Franklin or Michael, a member of The Lost MC who killed a LSPD Officer tells one of them that the Angels of Death are "finished", claiming they have no more chapters anywhere in the United States.

The wars between the Angels of Death and The Lost MC are mentioned by Malc in GTA Online. He says "their wars" are like the wars in Los Santos (referencing The Families and Ballas rivalry).

The areas where the Angels of Death appear throughout Liberty City and Alderney.

GTA IV and The Ballad of Gay Tony

They act and behave like civilians, only armed and aggressive.

Full on gang members, arch enemies, will have more weaponry. 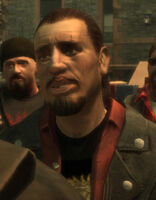 A lieutenant of the Angels of Death.

The Angels of Death Clubhouse. 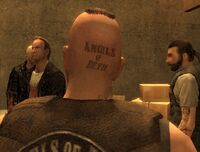 An "Angels of Deth" tattoo.

A group of Angels of Death hanging out.

The Angels of Death MC back patch.

A fat Angel of Death.

An Angel of Death biker outside of his clubhouse. 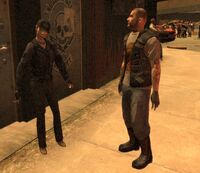 An Angel of Death and his old lady. 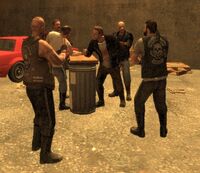 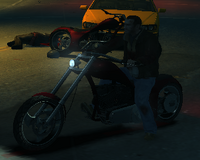 The Angel in GTA Chinatown Wars used by the Angel of Death.

The Burrito in Grand Theft Auto: Chinatown Wars used by the Angels of Death.