In-game time
“What the fuck do they want? I'm out of rehab three minutes, and they think they can crash my party? Come on.”
— Billy Grey

Angels in America is a mission in The Lost and Damned, given by Billy Grey.

Billy throws a party celebrating his release from rehabilitation inside the Lost MC Clubhouse. Johnny walks in and, after pushing off his old lady, Johnny and Billy immediately start arguing. Before things can get more than verbal however, Jason Michaels walks in and announces that some Angels of Death members are outside. The Angels of Death, spoken for by an unnamed lieutenant, are angry over the murder of their brothers in the previous mission, stating they thought there was a truce created between the two gangs after Billy's incarceration. Billy claims that "he wasn't aware".

The Angels of Death lieutenant acknowledges the ended truce, calling Billy an old man and giving him the middle finger before walking away. Billy pulls out his handgun from behind his back and shoots the lieutenant in the back.

Johnny, Jason and two randomly generated Lost MC members chase after the rest of the Angels of Death, and after successfully killing them before they can tell the others the truce is off, Billy will call Johnny and tell him to meet him at Grummer Road.

The two random Lost MC members will ride off, and Johnny will meet up with Jason and Billy at Grummer Road. Jason explains to Johnny that he can't hang out because he has plans with a "hot Russian broad", and that he plans on drinking her father's expensive vodka and soon after to "fuck her under the pier.", though this does not go as planned. Jason and Billy part ways and the mission ends.

The player is tasked to kill the escaping A.O.D members, with Jason and two other Lost members helping Johnny out. Johnny is equipped with a Sawn-off Shotgun that can be fired from the Hexer, so the player is able to use it to blow them off their bikes. When all the enemy bikers are slaughtered, Billy will call, telling and ordering Johnny to meet him at Grummer Road. 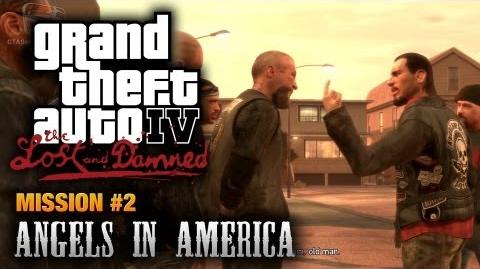