An Angel in The Lost and Damned.

TLAD
This article is for the motorcycle. For other uses, see Angel.

The Angel is the gang vehicle of both the Vice City Bikers and the Liberty City Bikers.

The Angel does not appear in Grand Theft Auto IV, although references and assets can be found in the game files. This model retains the side panniers and its paintjob is no longer patriotic, but stripes of two colors.

The Angel appears officially in the The Lost and Damned, where it is the main and favored bike of The Angels of Death (as opposed to the Hellfury in GTA IV).

Although it has lost its patriotic paint job and side panniers in The Lost and Damned, it employs the same Harley-Davidson "panhead" engine seen on the bikes in "Easy Rider". In the Beta version, however, the Angel used is the same from the GTA IV Beta version, which had a luggage rack (as seen in the first trailer of TLAD). The Angel is based on a Harley-Davidson FXSTC Softail Custom.

The Angel will have different set of parts, including: a small fuel tank, a large rounded fuel tank, a speedometer, two straight exhaust tubes and two curved exhaust tubes. There are AOD variants that usually are orange and have four exhausts tubes, which are technically both sets of exhaust tubes together.

The Angel in Grand Theft Auto: Chinatown Wars retains the side panniers of its pre-GTA IV renditions as a prominent feature, but the front wheel sticks out much less, making the Angel appear more like a customised cruiser than a chopper.

In the PSP version of GTA Chinatown Wars, the handlebars of the Angel are trimmed down into more conventional ones, and the panniers are removed, adding to the 'custom cruiser' appearance. The gang variant of the Angel is also edited, as it looks exactly like the normal one, but has a unique paintjob and worsened performance.

The Angel's Performance is nearly similar to the Freeway; being heavy, the vehicle has a wider turning radius and a further stopping distance, but makes up for with a powerful engine that provides the motorcycle moderately good top speeds and acceleration. Like the Freeway, it is also difficult to execute wheelies and stoppies with the bike, due largely, once again, to its heavy weight.

The Angel performs similarly to the 3D Universe rendition, having almost the same properties of acceleration, turning radius and stopping distance. However, it makes up for being more stable than the Daemon, a similar bike, at the cost of being inferior in handling and acceleration.

Both variants in Grand Theft Auto: Chinatown Wars feature average performance for a motorcycle, but minor performance differences may be noted between the two variants, as the regular Angel features more sensitive steering, and a higher top speed and rate of acceleration than the gang variant. However, given the limitations of riding a high speed vehicle in a top-down perspective, as well as manner in which the camera reacts to slight cornering, the gang variant may also be interpreted as being more suitable for practical use in the game.

Version without speedometer and straight exhaust.

Angels of Death version with 4 exhaust. 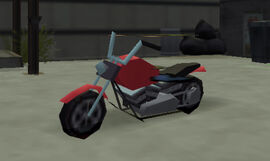