For the The Lost and Damned character, see Andreas.
For the motorcycle, see Sanchez.

Abdel Gonzalez
“I'm out. Agent Haines'll get in touch with you once Operation Save the World's a go. Get your crew together, okay?”
— Agent Sanchez to Franklin, Michael and Trevor after their bank robbery in The Paleto Score.

Agent Sanchez is first seen at a meeting between Haines, Michael De Santa, and Dave Norton outside the FIB building. The three agents task Michael, along with his accomplices Franklin Clinton and Trevor Phillips, to perform a mid-air extraction of Ferdinand Kerimov from the IAA building, as both agencies believe he has ties to suspected Azerbaijani terrorist Tahir Javan and Haines wants the credit for taking him out. Later on, Sanchez is present when Haines and Norton coerce the trio into ransacking a Stockade filled with government bonds that, according to them, the IAA intend to use in order to fund gang related activities.

Later on, after the events of The Bureau Raid, Agent Sanchez accompanies Agents Haines and Norton to the Kortz Center to discuss their current situation with Michael. Haines attempts to order him to arrest Michael and Agent Norton in order to prevent them from revealing Haines as the mastermind behind the attack on the FIB. After a group of IAA agents (headed by Agent ULP) come to arrest the group for "anti-American activity", Sanchez suddenly reveals himself to be a double agent, and a rival group of corrupt FIB agents appear. An attack helicopter filled with Merryweather mercenaries appears soon after, creating a 4-way standoff and eventual gunfight. During the confrontation, a member of the FIB team shoots Haines in the leg, who then, in retaliation, shoots Sanchez in the head, killing him instantly.

Following the shootout, Dave tells Michael that blame for the shootout at Kortz Center can mostly be pinned on Sanchez. 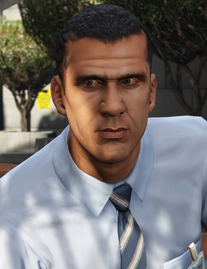 Andreas in the original version of Grand Theft Auto V. 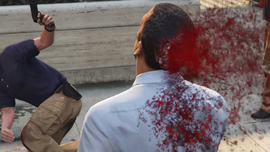