GTA Wiki
Register
Don't have an account?
Sign In
Advertisement
in: Pages with non-numeric formatnum arguments, Vehicles, Vehicles in GTA 1,
and 18 more
English

Wikipedia has an article on:
Ambulance

For the fictional band, see The Ambulance.

The Ambulance is an emergency vehicle that has appeared in every game in the series (except Grand Theft Auto 2, where there is a different vehicle named Medicar). It is manufactured by Brute in the HD Universe.

The vehicle is, invariably, a van or truck-based emergency vehicle (usually a cutaway van), featuring red and white lights, sirens and a matching paint scheme, complete with its typical letters on backwards. Throughout the series, the siren sound has varied slightly, as has the design of the vehicle itself. If the player decides to go on a killing spree or get into a fight, and pedestrians are killed, an Ambulance will arrive and two paramedics will get out and attempt to revive the wounded. Typically, if paramedics are killed, it creates more police attention than other civilians.

In all the 3D Universe games, the player receives 20 points of health upon entering an Ambulance. In Grand Theft Auto IV, the player can even dial 911 to summon an Ambulance, from which the player can replenish their health for a price, or steal to regain some, but not all, of their health. Depending of the remaining health, the paramedics will take up to $950 (though the calculation will consider $1000 as the maximum value, it is not possible to recover from an empty health point).

The Ambulance prominently comes in a red and white paint scheme, with the exception of the original Grand Theft Auto's Ambulance in Vice City and the GTA V's one.

The Ambulance in Grand Theft Auto is depicted with a generic pickup-style cab, possibly a Ford E-Series. The Liberty City version has a white and red color scheme, the San Andreas version uses the same scheme with the Star of Life marked on the roof, and the Vice City version is identical to the Liberty City version, but with a green color instead of red.

The Grand Theft Auto: London rendition is based on a European or British model, most probably a Bedford CA. It is always white with a red square and a white cross, as well as two blue beacons.

Ambulances in Grand Theft Auto III through to Grand Theft Auto: Vice City Stories are based on various generations of the Ford E-Series chassis, mainly the third and fourth generations. The rear compartment's design remains the same on all models, but the cabin and details are different.

In Grand Theft Auto IV, the Ambulance takes influence from the GMC Sierra 3500 cab-chassis and shares the cab design with the Declasse Burrito.

The vehicle assumes a much larger design than previous iterations and has various details, being silver/chrome handles beside the door windows, along with two antennas and a V-shaped lightbar on the roof (with the latter being the same as those found on LCPD patrol cars). The rear box has large windows and an unusable access door on the passenger side, along with various storage compartments. The rear end has the corresponding access doors and a grey bumper at the bottom that houses the license plate, square tail lights and a large step. There are also various unusable emergency lights around the vehicle and a lightbar on the back. It may also come with an optional bull bar on the front end, which also includes a mirrored "Ambulance" stencil on what appears to be a wind deflector.

The vehicle spawns in a white primary color on the upper half and a red secondary color on the lower half, with an additional secondary-colored stripe around the rear box, with industrial wheels derived from the Burrito and many other industrial vehicles. They are used by the MS Paramedic and are labeled "364".

The Ambulance reuses the primary and secondary siren tones from other emergency vehicles in the game; however, it has a unique warning tone which is much faster than the regular police warning tone.

In Grand Theft Auto: Chinatown Wars, the Nintendo DS version of the Ambulance assumes a design that takes elements from the 3D Universe and the HD Universe iterations, while the iOS version is largely identical to the GTA IV iteration (though with fewer details on the box).

In Grand Theft Auto V and Grand Theft Auto Online, the Ambulance's design remains mostly unchanged from its appearance in GTA IV, but the lower headlights work as high-beam lights (unlike the Burrito from the same game or its previous iteration), while the inner tail light units were replaced by white reverse lights. Due to the revamped lighting system, the Ambulance gains several changes to the emergency lights: the main lightbar is replaced with a standard all-red 4-rotor light bar on the roof, while the front fenders and the area above the rear wheel arches have additional red lights. The original lights from the GTA IV iteration, such as the ones on the grille, the sides and the rear end, are functional, with the square lights on the rear end moved down slightly.

The Ambulance spawns in three different liveries, which are randomized through dialing 911 on the Mobile Phone.

In the enhanced version of GTA V, the Ambulance has its own unique siren sound, which resembles that of GTA Vice City police and fire truck sirens. The siren set is composed of three tones: a unique primary and secondary tone, as well as an additional warning tone also used on other emergency vehicles. The Ambulance has a standard saloon horn.

From GTA III onward, the Ambulance is fairly fast for its class and has decent brakes, but is very top heavy and unstable, making it prone to rolling over under rough cornering. The AWD layout provides good traction for most surfaces, but due to the stability issue, it is not very recommended for uneven terrain.

Ambulances are powered by a diesel engine and use a rather smooth engine sound, similar to most vans.

The Ambulance is responsive for a large vehicle, given its design as an emergency vehicle, a strong turbocharged 4.5L diesel engine and the AWD layout. Acceleration is good, and the top speed is high. Handling is smooth, with soft suspension that may sometimes swing the Ambulance's wide body around corners. Braking is good and can stop the Ambulance in a fairly short distance, depending on the speed of the vehicle, at the cost of decreased effectiveness when taking corners, as the vehicle will not turn under braking pressure.

The Ambulance uses a unique engine sound, being generally noisy at higher revs, but with a moderate volume, also shared with the Boxville and the Mr Tasty.

Ambulances in Grand Theft Auto V and Grand Theft Auto Online perform slightly better than their last appearance, with upgraded handling, the vehicle has acceptable suspension and is able to perform maneuvers much better than in GTA IV. What's more, the vehicle seems to be more stable under braking, sharp turns and high speed cornering. The Ambulance is slightly more rigid in terms of body damage, showing little deformation as a whole, but is still considerably weak for its size, and the vehicle cannot take as much engine damage. The front guard also serves little purpose, as it detaches from the vehicle under the smallest of collisions. The vehicle has all wheel drive, but still struggles to deliver this extra power, particularly in off-road conditions, where all wheel drive usually serves its usage best. The player is recommended to use this vehicle with due care, as it is not able to push vehicles out of the way as effortlessly as the GTA IV counterpart. The player can also stand on top of a moving Ambulance without the risk of falling off.[1]

The vehicle is powered by a compact twin-cam inline-4 with a mounted turbocharger, laid transversely and coupled to a 5-speed gearbox, powering all four wheels. The engine sound is again unique for this vehicle, carried over from GTA IV, and does not match its standard chassis variant, the Burrito, nor its other service counterparts, the Rental Shuttle Bus and Tourbus. 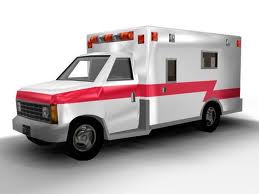 The Ambulance in the Beta of GTA III.

Design of the Ambulance in Grand Theft Auto Advance. 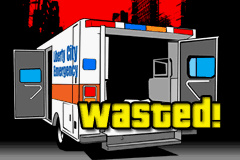 Artwork of the Ambulance in Grand Theft Auto Advance.

An Ambulance with a front bull-bar in Grand Theft Auto IV.

An Ambulance with lights and sirens activated. (Rear quarter view)

The Ambulance on the updated Rockstar Games Social Club.

The Paramedic side-mission can be toggled on or off when driving the Ambulance in all GTA III-era games. This mission requires the player to find, pick up and deliver patients to the hospital within a time limit, while endeavoring to drive as safely as possible (each bump further injures the passengers). With every level comes another patient to deliver, increasing the difficulty. Usually when the player beats level 12 the mission is complete (but can be carried on and replayed later) and a reward is achieved, e.g. infinite sprint or extra health.

The Ambulance, in most of its appearances, naturally spawns outside hospitals.