Unknown
“I was just talking to a friend on my cell phone when I hear them behind me, yelling about the industrial revolution and the internet.”
— Altruist Cult Victim

The Altruist Cult Victim is a minor character in Grand Theft Auto V who appears in Random Event - Rogue Altruists.

The girl is found in Baytree Canyon Road in Great Chaparral, being attacked by two old men from the Altruist Cult, who are trying to pull her inside a Fugitive.

According to the description of the girl, she was talking with a friend on the cellphone, when the two old men appeared behind her, screaming about industrial revolution and the internet. She first thought that they were two senile old timers who had escaped from a nursing home, but then they started yelling at her and got her pinned down to the ground, trying to tie her up. They also talked about a manifest and drinking her blood.

The girl says that she realized that they were a bunch of old men from the baby boom generation, when they complained about her generation ruining the world.

When the protagonist kills the two altruist members, the girl asks if he could give her a ride to her house on Senora Road, close to the Redwood Lights Track.

Along the way, the protagonist comments how hypocritical it is that despite the hatred that the cult members have for technology, they were still using a car, to which the girl agrees, saying that they are like the super religious people of the east that are shown on MeTV, that despite their renouncing the modern life, still go to the market in a pickup and use Eris shoes.

Some of the dialogues change dependent on which protagonist was used in the mission:

Eventually, the protagonist takes the girl to her house and the mission ends. It's impossible to do this random event with Trevor, since he is an associate of the Altruist Cult. 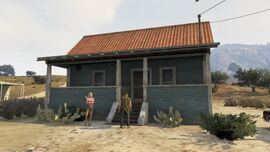 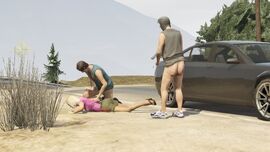