Boxville
For the delivery company itself, see Alpha Mail.

The Brute Alphamail is a van featured in Grand Theft Auto: Chinatown Wars.

The vehicle is evidently a large delivery van for Alpha Mail bearing a likeness to the Boxville and GTA Chinatown Wars' NOOSE Enforcer. As a result of its affiliation with Alpha Mail, the van bears a blue, beige and white livery, as well as the Alpha Mail company logos.

Performance of the vehicle is generally average, with a slightly below average top speed, average acceleration and cornering, and generally responsive brakes. However, the Alphamail's strength lies in its resilience to damage, being able to sustain more damage and larger amounts of gunfire than smaller vehicles. 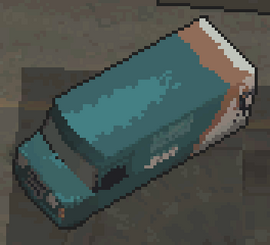 The Alphamail in the Nintendo DS version of Grand Theft Auto: Chinatown Wars.