Alpha Mail is a well established company with two locations in GTA IV; a depot on both sides of Jackhammer Street in Industrial and a sizeable warehouse in Port Tudor in Alderney.

Also in GTA CW, the company plays a role during the side mission Excess Delivery - Alpha Mail. The van parked in front of the company depot in Industrial, activates this mission once entered, thus making the player work for the company in the mission.

The company's Mule in GTA IV covered in graffiti.

Rear view of the Mule in GTA IV. 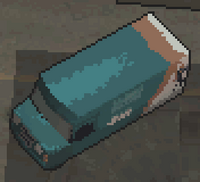 Alpha Mail livery for the Deviant.
Add a photo to this gallery

Industrial, Bohan
Add a photo to this gallery

LSIA, Los Santos
Add a photo to this gallery

Retrieved from "https://gta.fandom.com/wiki/Alpha_Mail?oldid=1191590"
Community content is available under CC-BY-SA unless otherwise noted.