Standard White - 100%
Not to be confused with the Alpha, a 2-door coupé.
“Engine: four cylinder, fixed pitch.
Wing area: 66 square feet.
Cockpit size: matchbox.
Cabin temperature: hotter than Satan's taint.
Chances of survival if you hit anything more than a light crosswind: none whatsoever.
Top Speed: routinely fatal.
Customer satisfaction: are you still there? Did you read the part about the top speed?
Please note: This aircraft is excluded from Pegasus Lifestyle Management and must be stored in a personal hangar.

The Buckingham Alpha-Z1 is a fixed-wing aircraft released as part of the Smuggler's Run update for Grand Theft Auto Online.

The Alpha-Z1 appears to be based on a Reberry 3M1C1R, seen in the wide nose and the positioning of the main landing undercarriage.

The aircraft is depicted with a seemingly small fuselage similar to the Mallard, where the front has a two-bladed propeller and a rather long nose with two protruding intakes on either side, together with an additional front intake and rear-facing exhaust on the underside. Around the main section, there is a small cockpit with a sliding canopy, as well as two wings mounted below (low-wing setup), which house bulky sections for the main landing wheels and the two square taxi lights, along with the aerobatic horizon reference devices on the wingtips. Towards the tail boom and empennage, there is an elevated section behind the cockpit that gradually decrease in height towards the vertical stabilizer, while the horizontal stabilizers and tail landing wheel can be seen on the end. The interior of the aircraft is very compact, having a small flight instrument panel with the functional dials on the upper section.

The primary color of the aircraft is applied on the spinner, most of the fuselage, wings and stabilizers, while the secondary one is applied on part of the nose/engine compartment, the bulky sections on the wings, part of the horizontal stabilizers and the control stick. It uses a set of industrial wheels similar to the ones found on industrial vehicles like the Benson, the Mule and the Phantom. The rims are also affected by the primary color, resulting in a slightly darker tint/shade of the choosen primary color.

As predicted by the website, the Alpha-Z1 is practically one of the fastest piston-powered aircraft in the game (even surpassing jet-powered aircraft like the Hydra and P-996 LAZER), possesing great speed and short take-off distance. However, its handling may be rather sensitive, as an erratic movement could simply roll the plane more than intended, being a dangerous maneuver when flying low. This issue, combined with the high speed and the low clearance, would cause the player to experience problems when attempting to land even in a flat runway, as the plane will be also sensitive to hard impacts, causing it to disrupt the landing sequence.

The Alpha-Z1 is stated to be powered by a 4-cylinder engine, which, given the proportions of the nose, would have an horizontally-opposed (flat) configuration. Its sound appears to be similar to the one from most small aircraft, albeit having a higher pitch when revving the engine at full speed.

The Alpha-Z1 (white plane) as seen in an official screenshot. 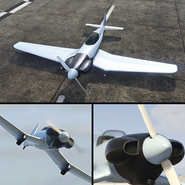 The Alpha-Z1 on the updated Rockstar Games Social Club.

The Alpha-Z1 in the cinematic preview on GTA Online Rockstar Games Social Club.