View source
watch 02:56
Raise a Floppa - The Loop
Do you like this video?
Play Sound
Not to be confused with the Alpha Z-1, a stunt monoplane added with the Smuggler’s Run Update.

Standard White - 100%
“Blending modern performance and design with the classic luxury styling of a stately car, the Alpha is sleek, sexy and handles so well you'll forget you're driving it. Which could be a problem at 150 mph...”
— Legendary Motorsport description.

Resembling a 1991 Dodge Stealth (a North American captive import of the Mitsubishi GTO with slight styling differences), the Alpha is designed with a sporty and modern body design, implying the vehicle is one of the newest models in its time, but the curves make the Alpha resemble the Mitsubishi Eclipse. The vehicle is also depicted with a rather large body compared to the Super GT (despite the fact that the main real life inspirations for the Alpha and Super GT are related).

The Alpha features rounded lights, two doors and a black strip on the rear trunk lid/hatch, as well as a fuel cap on the passenger side. The vehicle spawns in a variety of primary colors on the body.

In Grand Theft Auto V and Grand Theft Auto Online, the Alpha resembles the 2013 Cadillac Elmiraj concept, albeit with its design modeled like an actual production car. The headlights are pointed in the opposite direction than modern Cadillac vehicles. The rear fascia, most notably the tail lights, are inspired by the 2008-2012 Maserati Quattroporte V (M139), while the trunk area resembles those of the Cadillac sedans released for the 2013-2014 model years, such as the 2013-2019 Cadillac ATS, 2014-2019 Cadillac CTS and 2013-2017 Cadillac XTS, with the trunk lid derived from the 2013 Rolls-Royce Wraith.

The Alpha assumes a similar two-door layout from its previous iteration, but leans more towards a luxury approach and having a slightly enlarged body. The front bumper is rather curved and has a set of three intakes, with the middle one being slightly narrower and bearing a chrome finish around, while the upper area has a large grille with an horizontal element and also having a chrome finish around both halves, with a circular section on the center bearing the Albany logo. The sections beside the grille house a set of modern headlights, consisting of circular units in a vertical positioning and modern LED-like strips at the bottom. The hood is relatively simple and has two body lines starting from the grille and reaching towards the A-pillars of the cabin, with three additional smoother lines.

On the sides, the car assumes a rather basic design, where it features silver/chrome strips on the front fenders bearing the Albany badging, as well as discreet exit vents between the front arches and the doors, creating a slightly concave formation passing through the doors. The doors themselves also have chrome strips aligned with the ones on the fenders and chrome horizontal door handles, while the rear portion is defines by body lines that become sharper as they approach to the rear end, creating upper surfaces next to the trunk area. The greenhouse area makes use of silver/chrome trim around the side windows and black separations separating the door windows and the rear-quarter windows, as well as small mirror wings near the A-pillars. The trunk lid appears to be similar to the hood, having two body lines connected to the roof lines of the cabin and three additional smoother lines.

The rear of the car is distinguished by the third brake light on the trunk lid and the tail lights on the outer edges, each one having large red main/turning lights and smaller brake/reverse lights. The section below the trunk lid is occupied by a silver/chrome strip, an inset portion holding the license plate and the Albany badging on the passenger side. The rear bumper is relatively simple and houses an exit vent on the center and two rectangular exhaust tips beside it. In the enhanced version, the car shares the same interior as the 9F and the Rapid GT.

Most of its bodywork and the interior stitching are painted with the primary color, while the bottom part of the rear bumper and the circular portion where the front badge is located are painted with the secondary color (always set to black in the case of examples found on streets). Its wheels sport a unique rim design, being 5-spoke split rims with a wider end.

The Alpha is powered by what sounds like an underpowered V8, combined with a five-speed gearbox. The stiff suspension, combined with ineffective street tires cause the Alpha to fishtail wildly when under hard throttle or exiting a corner. The Alpha's flimsy construction makes it a poor choice for police chases and evading rival gangs. The car is also a two-door, so only one gang member can ride with CJ. Top speed is mediocre for a sports car, placed even lower than the Euros, the slowest of the super cars. An excellent driver, however, can trounce even the almighty Infernus in street races. The Alpha is chosen as the player's car for the San Fierro Fastlane street race, which to many gamers, is the most difficult race in the game. The Alpha's drifting personality and poor construction make the uphill sections treacherous, catching the lead Uranus a chore, and even when successful in doing so, keeping the car in one piece for the remainder of the race is a nightmare. Overall, the Alpha is a poor choice for new drivers and an excellent choice for expert drivers looking for a challenge.

The Alpha is powered by a single-cam V8, assumed by the engine cover. The website further supports the apparent V8, stating it is a 4.3 liter V8 pushing 500hp. The vehicle's top speed is high, with decent acceleration but below-average launch speed due to a combination of high weight, rear wheel drive, and a high-power engine producing wheel-spin from a standing start. Braking is very good despite the car's weight. Handling is smooth, with a slight tendency to oversteer when cornering at high speeds that can be countered fairly easily. The car's overall performance is very good, making it a fun car to drive. In races, it is outclassed by other cars in the sports category.

The engine sound is relatively low-revving, similar to the Jackal and the Police Cruiser.

The Alpha can only be modified at TransFender. 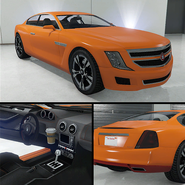 The Alpha on Legendary Motorsport in the enhanced version of GTA V.

The Alpha on the updated Rockstar Games Social Club.

The Alpha in the cinematic preview on GTA V Rockstar Games Social Club.

The Alpha in the cinematic preview on GTA Online Rockstar Games Social Club.

The Alpha with engine smoke exhaling. Note it comes from the rear rather than the engine bay.

3 heavily modified variants of the Alpha may appear in Vehicle Cargo source missions. Each variant has a unique license plate number, colour combination and different set of bodywork modifications.

Pre-modified variants of the Alpha can be seen driving around Los Santos randomly. The following two sets may spawn only in story mode. The vehicles appear in set color sets with the same modifications. 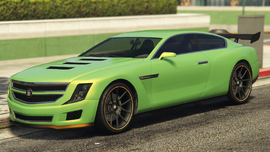 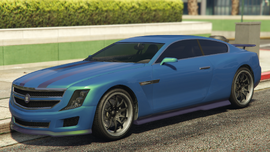 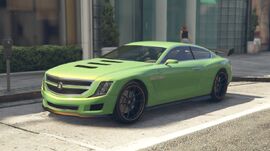 Like the randomly spawning modified Alphas, two sets of Alphas may spawn outside Los Santos Customs, pre-modified. These again only spawn in single player. The vehicles appear in set color sets with the same modifications. They will not spawn with any of the default extra components. These variants are named "LS_CUSTOMS_MODDED_SP" and use the exact same modifications and colors as the Business DLC Saloon Modded sets.

A modified variant occasionally spawns at the Epsilon Building in the north side gated area during evening hours, however it pointedly does not have the signature Epsilon 'baby blue' color scheme, instead it sports a metallic Light Blue paintjob for both primary and secondary colors with a blue wheel color that is not found in the color list to match. 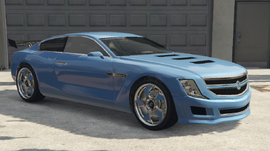 The Alpha is part of four vehiclemodelsets, "LS_CUSTOMS_MODDED_SP", "BUSINESS_DLC_SALOON_MODDED_1", "BUSINESS_DLC_SALOON_MODDED_2" and "EPSILON_MODDED". The first allows heavily modified Alphas, among many other modified cars to spawn outside Los Santos Customs, as well at other locations, and the second and third are strictly for the Alpha to spawn in specific locations. The fourth model set allows a baby-blue Alpha to spawn outside the Epsilon Building.