Tommy has started helping the band Love Fist organize their concert but manager Kent Paul is looking for a security and he suggests Tommy to meet the local Biker gang's leader at The Greasy Chopper. Tommy goes to the bar looking for Mitch Baker and after asking whether he's interested, Tommy is made fun of by Mitch who is playing pool and is questioned whether he can handle a bike before going any further with the alliance he's looking for. Mitch sends three of his bikers (who include Cougar and Zeppelin) to race Tommy in an Angel race. Tommy manages to win the race and thus proves himself worthy handling a bike and being part of the gang.

The reward for completing this mission is $1,000 and the mission Messing with the Man is unlocked. 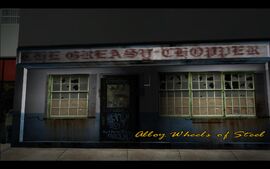 Tommy arrives at the Greasy Chopper bar in Downtown, as instructed by Kent Paul, to find some protection for a Love Fist gig. 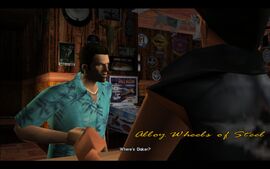 Tommy approaches the bartender and asks him for a "Big" Mitch Baker. 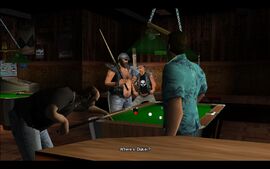 The bartender points Tommy to a biker playing pool nearby. 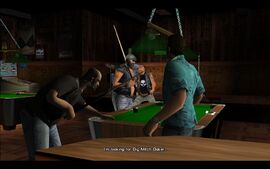 Tommy approaches the biker and asks him for a Big Mitch Baker. 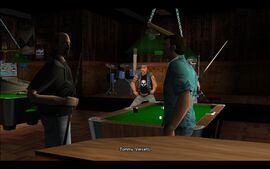 The biker asks Tommy who's asking for him and Tommy introduces himself. 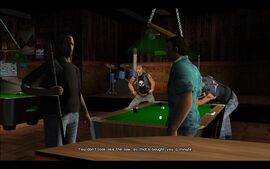 Mitch tells Tommy that he doesn't look like a policeman, so he can talk. 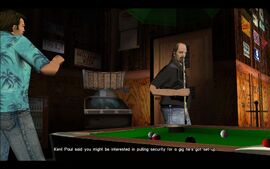 Tommy tells Mitch that Kent Paul needs some protection for a gig he's got set up. 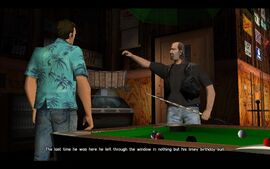 Mitch laughs at Tommy mentioning Kent and mentions that the last time he was at the Greasy Chopper he was thrown out through a window, naked. 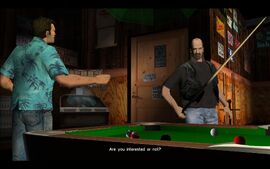 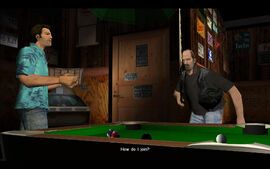 Mitch tells Tommy that he'll only do favors for one of his own and Tommy asks how he could join their motorcycle club. 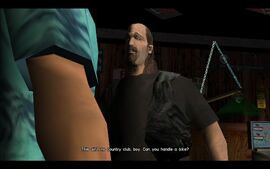 Mitch tells Tommy that their motorcycle club is not a country club where you only need to sign up and asks Tommy if he can handle a bike. 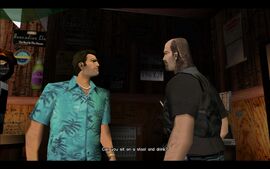 Tommy mockingly replies saying that he indeed can. 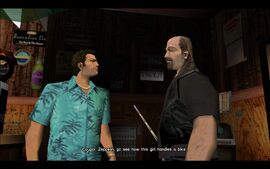 Mitch then orders two of his boys, Cougar and Zeppelin to set up a race too see if Tommy can handle riding a chopper. 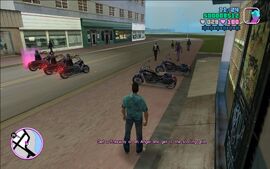 Outside, Tommy has to get a chopper and get to the starting grid. 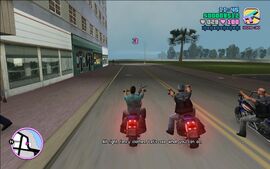 The beginning of the race. 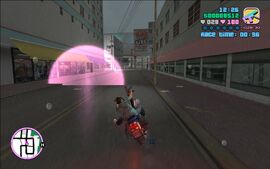 The middle of the race. 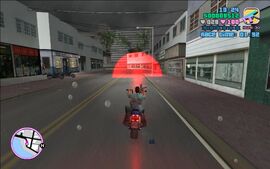 The ending of the race. 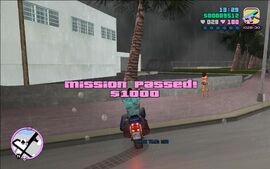 Tommy Vercetti shortly before the beginning of the race

Tommy racing against the Bikers, including Cougar and Zeppelin