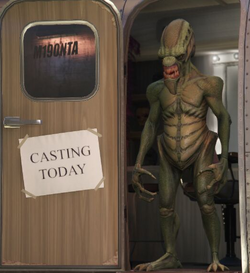 Aliens, also known as extraterrestrials, are creatures that did not originate on Earth. They appear in Grand Theft Auto V as easter eggs and figments of Michael's imagination.

Their bodies are similar to the Vortigaunts from the Half Life series, while their elongated head is reminiscent of the Xenomorphs from the Alien franchise. They have green skin, large crescent-shaped heads, and large mouths with big teeth.

The mission guides the player to drive ahead over the railroads but instead, turn right and go under the bridge, stop the car, get out, and the player will notice that there's a frozen alien in the river.

Aliens also appear during the mission Franklin and Lamar, where an alien movie, Republican Space Rangers is being filmed. They are actually not aliens but people costumed into aliens while the movie casting takes place, and they could be more or less an Easter Egg. At the same time, Franklin and Lamar are racing through the studio at high speeds. Not hitting any of the alien-dressed actors will count for the 100% mission score, checking the "We come in peace" box.

Playing the mission as Michael will trigger a hallucination after smoking pot. Michael's vision and hearing become blurred and the world around him appears to be in a haze. He is suddenly hefting a minigun as aliens begin to appear all around him. Michael must defeat the aliens without dying himself.

Barry, the man who gives Michael weed in the mission, refers to the aliens as "monsters" (The fact that Trevor hallucinates about clowns instead indicates the "monsters" might vary depending on the person).

Michael goes with Jimmy to a Burger Shot to score weed and a "special drink" from his dealer who works there. On their way back home, Michael experiences the onset of a psychedelic trip after taking a sip of Jimmy's ketamine-spiked drink. Jimmy then forces his father out of the Tailgater, and drives off. Michael then hallucinates being surrounded by monkeys, abducted by aliens, and then dropped off midair floating over the city.

The alien frozen under the railway bridge seen in the Prologue is still there in this mission. To see it, just follow the same steps as above.

This resupply job may appear once the player completed at least 600 resupplies and starting a new supply run between 21:00 and 23:00, but is still a random script, so it does not necessarily appear right after having 600 resupply jobs completed.

As a method of transportation the aliens use UFOs, or referred to popularly as "flying saucers" or "flying discs". One appears during the mission Did Somebody Say Yoga?, which is used to do experiments on human beings. A sunken UFO can be found at the north of the map at the bottom of the sea. Also, after achieving 100% Completion, a UFO can be seen on top of Mount Chiliad. Oddly, it has "FIB" written on it, which might mean that the agency knows about their existence and even managed to build an UFO by themselves. Different looking UFOs appear in the sky, high above Fort Zancudo and Sandy Shores.

An Alien magazine found in Lester's House.
Add a photo to this gallery 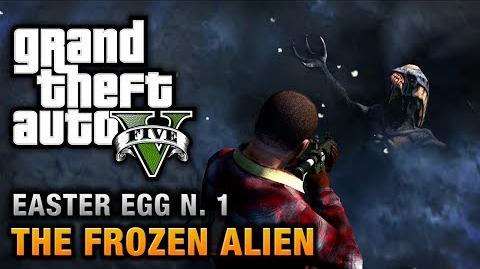 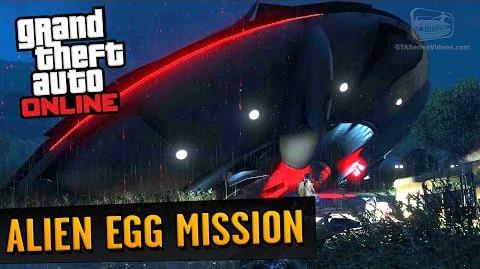 Retrieved from "https://gta.fandom.com/wiki/Aliens?oldid=1227030"
Community content is available under CC-BY-SA unless otherwise noted.