The video game is the third installment of the Alienprober franchise, available on the EXsorbeo 720 gaming system. The game is rated 16 years and up. The game is most likely a shooter. The game taglines are "Coming in your airlock" and "watch your back".

A promotional poster can be found in Lester's House. The game also appears on the cover of a sci-fi/gaming magazine called RamRager. It is also shown bundled with an Exsorbeo 720 console advertised for $349.99 in the window of XYZ Store in Morningwood.

The name "Alienprober", the slogans; "Coming in your airlock" and "watch your back" are sexual innuendos referring to mating with an alien.

The game case as seen advertised at XYZ Store. 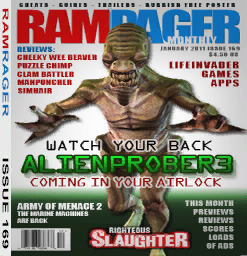 The game advertised on the front cover of RamRager magazine.
Retrieved from "https://gta.fandom.com/wiki/AlienProber3?oldid=1208580"
Community content is available under CC-BY-SA unless otherwise noted.