View source
watch 03:01
Wiki Targeted (Games)
Do you like this video?
Play Sound
For other characters and people named Alex, see Alex

He worked for Bobcat Security in Ludendorff, North Yankton.

During a heist at the Bobcat Security facility, he was working the security booth at the gate to the facility when he was shot in the head by one of Michael De Santa, Trevor Philips or Brad Snider as they gained entry to the site. 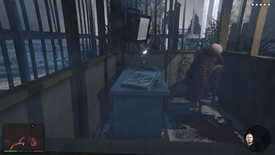 Alex's corpse as seen as the heist crew escape the cash storage depot.