The building is located on the corner of Jonestown Avenue and Applewhite Street in Alderney City, Alderney. It is situated north of the RON Building.

The Alderney Building is a 15-story office building with a decorative gable where its name is painted onto the brickwork. The building appears to be relatively old compared to other tall buildings around Alderney City, but holds several low-end retail stores on the bottom floor. According to several window signs, there is office space available throughout the building.

Perhaps its most notable outlet is the Thor Toys store found on the north corner of the building, the only of its kind. Other branches include R.S.N. Jewelry and Periconne Wigs. A Vapid Speedo billboard is found at the rear side of the building. 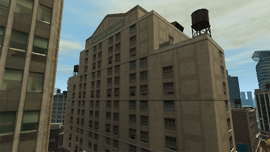 Front view of the building.
Add a photo to this gallery
Retrieved from "https://gta.fandom.com/wiki/Alderney_Building?oldid=1141838"
Community content is available under CC-BY-SA unless otherwise noted.