"Give the same refreshing feeling of your favorite drink, but delivered transdermally and discreetly."
— Slogan

It works similar to a nicotine patch, but provides alcohol to make a person quit drinking instead of smoking. Alco Patch is manufactured by Betta Pharmaceuticals, and is sold in 24/7 for $18 per pack. In GTA V, it is seen as a 3D model. 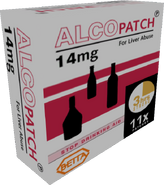 Retrieved from "https://gta.fandom.com/wiki/Alco_Patch?oldid=959373"
Community content is available under CC-BY-SA unless otherwise noted.