"The Drink of the Streets!"

Alco Holla is a brand of alcoholic energy drink in the HD Universe.

Alco Holla is a alcoholic drink consisting of Malt Liquor and Caffeine. The drink is advertised on two billboards, one in Mission Row and one in Downtown Vinewood on Clinton Avenue, it's also advertised on the ingame radio. Alco Holla appears to be advertised towards a predominantly African American audience but unlike other alcoholic beverages Alco Holla cannot be seen inside any convenience stores in San Andreas. The drink contains 14% alcohol and the tagline for the drink is "The drink of the streets."

The drink could be based on Four Loko, but it also seems to be mostly a general parody or mocking of modern hood and gangsta culture.

The radio ad features 4 characters, a woman screaming/singing her lines with an autotune, a woman advertising the drink, a man with a deep voice and a man speaking slang and marketing the drink. The ad is fast paced and edited like a remix with record scratches and sounds of pouring liquid in the background.

Woman 2: "You being marketed at now, Homie!"

Woman 2: "A combination of everything that makes a memorable evening; malt liquor and caffeine."

Man: "You blacking out, asshole." 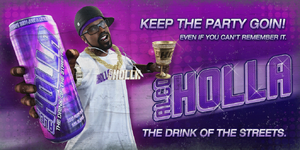 The Alco Holla billboard advertisement.
Add a photo to this gallery

Retrieved from "https://gta.fandom.com/wiki/Alco_Holla?oldid=1237718"
Community content is available under CC-BY-SA unless otherwise noted.