Unknown
“The other guy runs out of the shop and pushes me over and says something like "You forget a thousand things everyday. You make sure this is one of 'em." That was pretty scary.”
— Albert Stalley recalling the events of the The Jewel Store Job to the news during Mr. Philips

“So for the last time, move it!”
— Albert Stalley telling Franklin Clinton to move his bike

Albert is on his watch during the Jewelry Store Heist. He orders Franklin Clinton to move a motorbike he has parked outside the store. Michael De Santa later leaves the store, throws Stalley to the ground and threatens him, quoting one of Solomon Richards's movies. His name is revealed when he is being interviewed on Weazel News about the heist. During the interview, he mentions the quote that Michael said to him, catching the attention of Trevor, who is listening as he has sex with Ashley Butler.

A Bleeter user "cinncinati_philpp" posts on the site after the robbery, quoting Albert Stalley's perspective of the events[4], however this user claims to be on vacation so it is unlikely to be Stalley's own account. 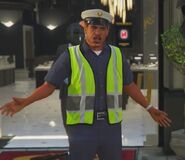 On the ground as the crew escapes.