Albany Avenue is an avenue in Grand Theft Auto IV and Grand Theft Auto: Chinatown Wars, located in Algonquin, Liberty City. It is is named after Albany, the state capital of New York.

The avenue starts in the north at an intersection with Topaz Street, Union Drive East and San Juan Road in East Holland, and runs directly south, passing through the areas of Lancaster, Middle Park East, Hatton Gardens, Lancet, Easton, Lower Easton, Lower Easton, Chinatown and coming to an end at an intersection with South Parkway running along the edge of The Exchange and Castle Gardens.

Along the road are various landmarks, buildings and features, including the Civilization Committee building, Africa Tower and not one but two police stations. It also passes beneath the Algonquin Bridge overpass and has several connections to Union Drive East. At the northern end, a Terroil gas station is found.

After passing the CC building, the eastern side of the avenue opens up to a look-out zone facing the Humboldt River and looking over Union Drive East, being much higher from the water than the UDE. Along this span of the road, which spans between Nickel Street and Ruby Street, parking areas, relaxing areas, benches and decorative trees and plants are found, along with connections to the waterfront at the other side of the UDE through footbridges. The northern half of the avenue also runs above or closely adjacent too to the Algonquin Outer Line J/A line running beneath the road, which has three stations at intersections along this road.

The entire street is a 2-lane road flowing in both directions and connects to almost all horizontal streets of the Algonquin alphabetical system, namely A, B, C, D, E, F, G, H, J, L, M, N, P, Q, R, S and T, missing out letters I, K, O, and falling short of U, V, W and X.

It is also the second longest street in Liberty City, beaten only by Columbus Avenue.

In GTA IV, Middle Park East Safehouse is located on Albany Avenue, on the corner of Pyrite Street.

It is likely based on Manhattan's First Avenue, given its location and prominence at the east-most avenue within Liberty City. 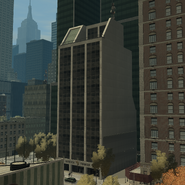 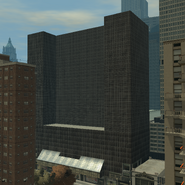 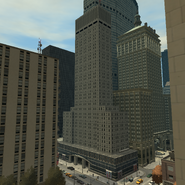