"All the mamma mia you can eat"

The restaurant has several locations around Liberty City and Los Santos, but the player cannot visit any location. Al Dente's serves "authentic" heavily processed and deep-frozen Italian cuisine the American way with large portions that are "tasteless and unhealthy".

According to a GTA IV radio commercial, Al Dente's restaurants are conveniently located near strip malls, much like any real-life casual dining chain.

Al Dente's is one of only a handful of businesses advertised on the radio that appears in-game in Liberty City. Its chain of restaurants is predominantly dotted within Algonquin, with the Al Dente's signage, represented by a fork and pasta, present on each restaurant.

The restaurant is likely a spoof of the Olive Garden, as its logo bears a prominent resemblance to that used by Olive Garden between 1998 and 2014. It could also be a spoof of Al Fresco's as both companies are Italian and share a similar name.

Al Dente's was also the name of a pizzeria chain across the country that served as a front for the Italian-American mafia, through which they smuggled more than one and a half billion dollars worth of heroin [1]. 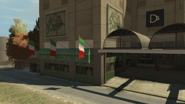