This article needs more images of:
All variations of the Akuma in The Ballad of Gay Tony.

Not to be confused with the Akula, a stealth attack chopper in Grand Theft Auto Online.
“A Japanese crotch rocket sure to please the ladies.”
— Southern San Andreas Super Autos description.

The Akuma is mainly based on the Buell XB12S, though it features a tubular frame, much like that of a Ducati Streetfighter or Triumph Speed Triple.

The Akuma appears to be a streetfighter variant of the Double T, sharing a lot of design cues. However, it has dual exposed headlamps and independent handlebars on the upper plate. The main body is mostly exposed and features a tubular frame and lower fairing on the engine bay, while the fuel tank appears to be similar to that of the Double T, albeit with carbon-fibre sections. The rear section is more or less identical, but features a dual-sided swing-arm with a single suspension spring, as well as the corresponding chain drive and sprocket on the left.

The bike features various extras and variations, which are:

The bike spawns in a variety of primary colours for the fuel tank and framed seats, as well as secondary colours for the tubular frame and rims. It uses the same wheel design as the Double T, being 6-spome split rims with medium-profile tyres, with the rear one being wider.

The bike returns to Grand Theft Auto V and Grand Theft Auto Online with almost the exact same design. However, the seat extras are no longer present, and only the exhaust options can be changed through a mod shop. In the enhanced version, the bike adds a small "Sports Bike" dial set, also used on motorcycles such as the PCJ-600 and Bati 801.

Colour distribution is more or less si ilar, where the primary colour is applied on the body, while the secondary colour is applied on the tubular frame. The rims have a dedicated wheel colour, which can be painted by selecting a custom rear wheel, applying a colour and change back to the stock wheel (as it won't reset to the default alloy colour), though with a darker tint/shade. It retains the same 6-spoke split rim design as its previous iteration and the Double T, being similar to the "Speedway" rims available in Los Santos Customs.

The Akuma is powered by a 4-cylinder engine coupled to a 5-speed transmission. This bike features a lightweight construction and has a relativity short wheelbase, making it ideal for city-streets getaways, and a good bike to use in trying to get the achievement/trophy Wheelie Rider. This short wheelbase, however, also means that it has a stability problem, which riders can feel when taking it on a high-speed corner. Acceleration is very impressive, but the brakes are not good enough to keep up with the speed.

The Akuma is one of the fastest motorcycles in the GTA IV trilogy so far, the fastest being the Double T Custom from The Lost and Damned. It shares the same high-revving engine sound from the Double T and its Custom variant.

The Akuma is the fastest accelerating vehicle in the game and maxes out the acceleration stat before modifications are applied to it. Its top speed is fast without leaning forward, but unfortunately, the Akuma is unable to wheelie at top speed, reducing its effectiveness on long straights where motorcycles which can wheelie will fly ahead of the Akuma. The corners are where the Akuma excels by leaps in bounds, having one of the tightest cornering radii among vehicles, and is able to continually accelerate through corners, making it effective on races where there are fewer straights and more corners.

The Akuma's incredible cornering abilities and acceleration make it a very easy vehicle to use effectively, but that comes at the cost of a very low skill cap. As such, the Akuma is a very good choice for those inexperienced with motorcycles, but more skilled players would gravitate towards motorcycles such as the Hakuchou or Bati 801 which are more effective in skilled hands than the Akuma.

Because of the Akuma's immense acceleration and cornering abilities, the Akuma is a solid motorcycle for racing. Its inability to wheelie is a major issue on longer tracks, but it serves to be a true contender on more technical circuits.

Again, the bike is powered by a 4-cylinder engine and coupled to a 5-speed gearbox. The engine sound is the same one from the Double T, which is rather low-revving compared to the one on motorcycles such as the PCJ 600 and the Vader, but emits an additional muffled tone heard on higher engine revolutions.

An Akuma in The Ballad of Gay Tony with no fenders, no mirrors, no fairing and long framed seat with underseat exhausts.

An Akuma with no front fairing and rear-view mirrors in Grand Theft Auto V. 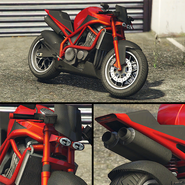 The Akuma on the updated Rockstar Games Social Club.

The Akuma in the cinematic preview on GTA V Rockstar Games Social Club.

The Akuma in the cinematic preview on GTA Online Rockstar Games Social Club.