View source
watch 01:51
What is the Akula?
Do you like this video?
Play Sound

20
Not to be confused with the Akuma, a sport motorcycle in The Ballad of Gay Tony, Grand Theft Auto V and Grand Theft Auto Online.
“Once upon a time, a blank radar screen meant you could relax. But times change. With the Akula in town, a blank radar screen probably means you're a few seconds away from being vaporized by a cackling sociopath in an attack helicopter. And there's only one way to make sure you're on the right side of that brave new world...
Please note: This aircraft is excluded from Pegasus Lifestyle Management and must be stored in a personal hangar.
”
— Warstock Cache & Carry description.

The Buckingham[1] Akula is a stealth gunship attack helicopter featured in Grand Theft Auto Online as part of The Doomsday Heist update.

The helicopter is depicted with a long and narrow fuselage, having an angular nose with the sighting device on the end and a large cabin with two top-hinged doors for access, as well as circular lamps on either side and the corresponding hatches for the main landing gear. The middle section of the aircraft is rather large and features various intakes and vents around the engine compartment, along with the folding stub wings on the lower sides. The tail boom and empennage are narrower in comparison to the rest of the helicopter, having the corresponding stabilizers, fenestron tail rotor and tall vertical stabilizer, as well as a dedicated compartment for the tail landing gear. Being of Russian origin, the Akula features various markings similar to that of the V-65 Molotok, including "RF1 АКУЛА" markings on the tail boom.

The interior of the aircraft is similar to the one from the FH-1 Hunter, having various green screens with animated "Lazer" displays and numerous switches around, as well as circular lens that are part of the sighting device on the nose. The occupants sit in a sedan-like layout, where the pilot and the copilot sit in the front row and the passengers in the rear one.

The primary colour of the aircraft is applied on most of the body, while the secondary one is applied on part of the nose, the sighting device, the front turret, the rotor hub, the lower surfaces of the fuselage and tail fins, and the main gear frames. It uses the same wheel design as the Hunter, being industrial wheels derived from vehicles like the Mule, the Benson and the Phantom. 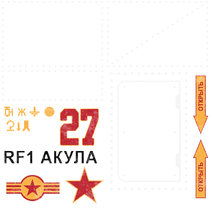 The helicopter is relatively fast, agile, and has similar handling to the FH-1 Hunter. According to Rockstar Games Social Club, the Akula currently holds the fastest acceleration and best agility records, however it is still barely surpassed by the Volatus in top speed. Handling wise, the Akula is extremely responsive, requiring minor inputs to smoothly control the aircraft. The Akula has the unique ability to perform an aileron roll, if either roll input is held while maintaining significant forward momentum. If the roll is not completed, the helicopter may begin falling out of the sky if the pilot does not recover.

The vehicle features two cameras with three vision modes: regular, thermal vision or night vision, which can be operated by the two rear passengers. While the Akula's weapons cannot be used while in stealth mode, the cameras can still be operated, allowing the operators to spot targets for the pilot.

The Savage is powered by twin turboshaft engines, which share the same engine and rotor sound as the Savage, the Buzzard and its Attack variant, appearing to be a higher-pitched variation of the one from the Maverick, with a slightly faster pacing.

The Akula serves as a versatile transport helicopter with strong armour and superior maneuverability, allowing it to evade threats such as homing rockets, which can also be outrun by the Akula's very high speed. With maximum armour upgrades, the helicopter will take eighteen Heavy Sniper rounds before exploding and can withstand five explosive rounds from the Heavy Sniper Mk II. The helicopter can survive two direct hits to the fuselage from homing missiles and a third one will destroy it. The helicopter's lock-on "hit box" is midway down the tail of the helicopter. This can make avoiding missiles while flying straight forward more difficult, compared to if it was centered on the engine of the aircraft. In addition, just like the Hunter, the Akula's rotor blades have a separate health pool. This potentially allows the Akula to survive up to four missiles, if two hit the helicopter's blades and two hit its main body.

The most notable feature of the vehicle is its stealth mode, which allows the entire crew to navigate around the map without being spotted by enemy radars, making it useful for surprise attacks and getaways. Enabling stealth mode also reduces the pilot's wanted level to 2 stars if the pilot has 3 or more stars. However, its weapons are disabled for the pilot and the copilot during the stealth mode. In addition, cloaking the Akula does not protect it from a Galaxy Super Yacht's defense system, the Weazel News TV spectator channel or being spotted by the Orbital Cannon surveillance system. Also, most homing weapons are still able to lock onto it. Combined with the Lack of countermeasures, the Pilot must be careful or skillful enough to dodge enemy missiles.

When stealth mode is enabled, it will hide the aircraft from the minimap along with all items carried by the occupants. These include:

Similar to the Hunter, the Akula features an array of weapons available for use by the pilot and the co-pilot/first officer:

An Akula shown in the official artwork.

Pre-release screenshot of the Akula, with dual minigun turret and Homing Missile upgrades.

The Akula, as seen in the trailer of The Doomsday Heist update. 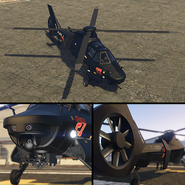 The Akula on Warstock Cache & Carry.

The Akula on the updated Rockstar Games Social Club.

The Akula in the cinematic preview on Rockstar Games Social Club. 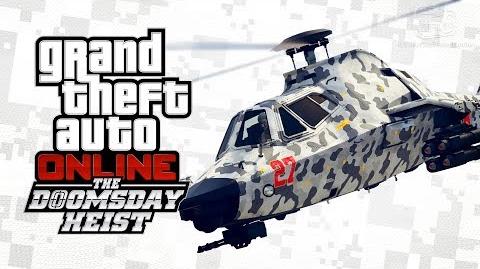