It functions as a scenery prop in all of its appearances and can only be entered (but not directly controlled) using a glitch in GTA Vice City Stories.

The Airtrain takes the appearance of a Boeing 727, with adjustments made to its design such as shorter outboard engines, differently designed wing aelerons, and a windshield design more reminiscent of that on older Airbus models. In all of its appearances, the airplane is featured in two different ways: Some are stationary solid props in airports and others are seen landing, taxiing and taking off. It seems to be the only kind of airliners that serve Francis International Airport and Escobar International Airport.

In Grand Theft Auto III and GTA Vice City, the flying airtrains are not solid, meaning the player can go through them without taking any damage. Simply spawning the Airtrain using trainers or modifications will crash the game as it's a vehicle that only relies on a path. The Airtrain's flight path is determined by the flight1.dat file.

In GTA Liberty City Stories, both the flying and parked airtrains differ from previous renditions, now having less and bigger windows, a hump and raised cockpit reminiscent of the Boeing 747 and an overall more cartoonish look. The flying versions are now solid, however, and touching their wheels will heavily injure the player and destroy his vehicle. The player can jump on its wing and "ride" on it while it takes off, yet he will be automatically ejected into the sea a few seconds later after reaching the game height limit.

In GTA Vice City Stories, the Airtrain is once again solid and will harm the player should they make contact with its wheels. While its flying version uses nearly the same model from GTA III and Vice City, the appearance of the stationary version differs from previous games - like in Liberty City Stories, it seems to have an extra floor for its cockpit, similar to a 747. Also, instead of being simply painted white with different airliner logos, it is now painted white with a red tail fin and blue nose (with a Plummet Airlines logo). The Airtrains that land and take off still look the same as their previous versions.

There are also 727-like airplanes in the GTA Chinatown Wars rendition of Francis International Airport. They can be seen parked around the airport and taking off and landing in the runways, yet never moving from them after landing, they replace the 747-based airliner found in Grand Theft Auto IV and its Episodes, however, unlike the 747 Jet, the Airtrain has no FlyUS decals.

The flying version of the plane can be accessed in GTA Vice City Stories through a glitch - If the player gets on the wing while the plane taxis from one runway to the other, and presses the triangle button near the intersection point between the back of the wing and the fuselage, he will be transported inside of the airplane.

The player doesn't have any control of the vehicle itself and can only change the radio stations while it flies on its pre-defined route over Vice City, in a way resembling the purchase of a flight in GTA San Andreas. Oddly, the player can only exit the Airtrain when its back wheels are touching the ground but not the front one, which is when it takes off and lands. It can also be spawned using a cheat device, yet this is once again uncontrollable since there is no scripted handling. 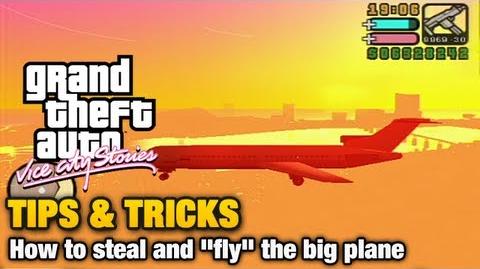 An untextured model of the Airtrain from GTA: San Andreas.

The shared interior of the plane.

The Airtrain in GTA Advance.