"If you're not an airport, we're not entirely sure why you'd want to buy an airport bus online. But this is America, and you can. So here it is."
―Warstock Cache & Carry description.

The Airport Bus is essentially a variant of the Bus designated for service within Los Santos International Airport, sharing the same body design and most of their details.

The Airport Bus comes in two colour schemes: a green and yellow variant with JiffiRent logos, and a green and white variant with Olympian Rentals logos. All airport buses will read L.S.I.A. as their destinations.

The Airport Bus handles the same as the regular Bus, let down by a wide turning radius with poor acceleration, but benefited by a decent top speed. The poor acceleration makes it easy for the player to get busted if attempting to escape a one star wanted level. As the engine is located in the rear, the vehicle can take endless amounts of frontal impacts without damaging the engine, and the rigid chassis prevents the wheels from campering or being exposed to collision damage, making it useful for pushing other vehicles out of the way. The player can also stand on top of a moving Airport Bus without the risk of falling off.[1] 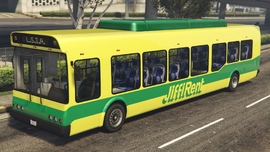 The Airport Bus on the Rockstar Games Social Club.

Retrieved from "https://gta.fandom.com/wiki/Airport_Bus?oldid=1212231"
Community content is available under CC-BY-SA unless otherwise noted.