GTA Wiki
Register
Don't have an account?
Sign In
Advertisement
in: Exclusive Enhanced Version Content in GTA Online, Articles with sections under construction, Missions,
and 5 more

In-game time
Not to the be confused with Air Freight Cargo, other Freemode missions added as part of the Smuggler's Run update.
“Hook on to a container and fly it to the drop-off location.”

Airfreight is a CEO/VIP Work mission featured in Grand Theft Auto Online as part of the Further Adventures in Finance and Felony update, released on June 7, 2016.

This Organization Work can only be triggered with at least one other player outside of the organization.

“Merryweather have something that belongs to one of our investors, and he'd like it back. You'll need to use the Cargobob we've provided, and be careful: it'll be in a lot of people's interests to take you down.”

When Airfreight is started by a VIP/CEO, a red and black Jetsam Cargobob[1]

will spawn at a semi-random location, which is dictated by where the mission is triggered. This Cargobob uses a mission-only extended hook in place of the smaller stock hook, and it is also possesses enhanced durability.

SecuroServ claim that Merryweather possess a container that belongs to one of their investors, who would like it back. They advise to use the Cargobob but also remind the organization to be wary of people trying to take them down. Upon entry of the Cargobob, the container will be marked on the map by a green hook icon

, and the pilot will need to fly over to the location.

At the site, the container is guarded by four Merryweather units, who will engage the player if they come too close. Once the player is engaged, one of these guards will run to a nearby Buzzard Attack Chopper and get in, after which he will take off and start attacking the player; if the player dies, it will shift targets to the container. It is advised the players take down the chopper and kill all the Merryweather units before taking the container. The pilot will need to use the hook to attack the container, at which point a delivery location will be marked on the map. At this point, a session-wide signal will also be broadcast, alerting all players of the organization's activities.

At the delivery location, a red flare marks the landing point. The pilot is prompted to drop the container; releasing it from too high of an altitude may damage it, decreasing its value. After a successful delivery, the pilot is told to exit the vehicle, as the Cargobob has a self-destruct protocol of 30 seconds, which is activated due to the vehicle being marked by law enforcement.

The player is able to use any other Cargobob instead of the one provided, though destroying the one supplied will result in a mission failure. Occasionally, the main Cargobob can even be damaged to the point of complete engine failure; however, as long as it does not explode, the mission will not end.

and stop them from delivering the container to earn cash and RP.”

Once the container is collected, all other players and organizations in the lobby are alerted and instructed to destroy the Cargobob

There are 13 possible Cargobob locations, one of which is randomly selected depending in which section of the map the mission is triggered. A particular area will mostly give the same location; however, every so often, the Cargobob may still spawn in a different position. The container location is tied to the Cargobob's position, meaning that it will always spawn in the same place for a specific Cargobob spawn point.

In total, there are 39 possible delivery locations, organised into 13 sets of 3 locations. Each Cargobob/container spawn point is tied to one of these sets, and one of the three possible drop-offs is chosed at random during the mission.

You have started Airfreight. Use the Cargobob

to collect the container and deliver it safely to the drop-off to earn cash and RP.
Your CEO has started Airfreight. Use the Cargobob

to collect the container and deliver it safely to the drop-off to earn cash and RP.
Organization have started Airfreight. Destroy their Cargobob

and stop them from delivering the container to earn cash and RP.
Press

to drop the hook from the Cargobob. Hover over and near the container to automatically hook onto it. 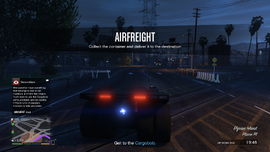 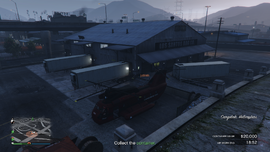 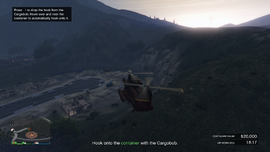 Hook onto the container. 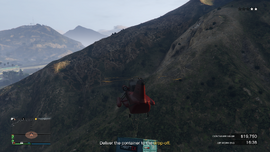 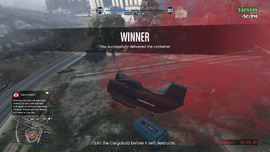