Air hockey is a tabletop minigame exclusive to The Lost and Damned and The Ballad of Gay Tony.

The basic premise of air hockey pits two players against each other in a challenge to push a hockey puck using mallets into the goal of each player on both ends of a table; this requires the player defend their goal while attempting propelling the puck into the opponent's goals. The first person to score seven points wins the game.

In both games, the player can opt to play air hockey against a random pedestrian, or against friends such as Jim Fitzgerald, Clay Simons, or Terry Thorpe in The Lost and Damned, or Armando Torres or Henrique Bardas in The Ballad of Gay Tony. 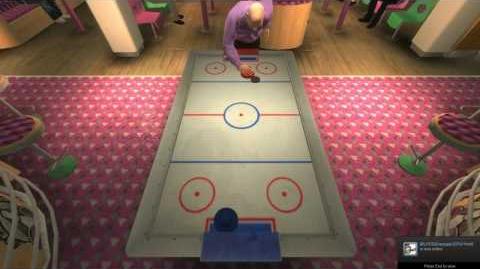 Retrieved from "https://gta.fandom.com/wiki/Air_Hockey?oldid=1186301"
Community content is available under CC-BY-SA unless otherwise noted.