There are multiple possible different Sell Cargo mission scenarios that a player can encounter when exporting Air Freight Cargo in the Smuggler's Run Update.

Once the player has gathered cargo inside the hangar, they are able to export it to buyers. The sell missions work very similar to Special Cargo sell missions. The missions vary in structure, however they all involve dropping and delivering packages across Blaine County and/or Los Santos. In all scenarios, the player is given 20 minutes to deliver all stock.

Unlike Vehicle Cargo and Supply sell missions, Air Freight Cargo mission difficulty isn't directly dependent on the amount of product sold, and the mission type is completely random each time, however several examples of sell missions do require 2 players to begin. The length of the missions vary, depending on the amount of cargo sold, however some missions can be lengthy with even just 1 crate of cargo being sold.

Bonuses are available for exported cargo, similar to Vehicle Cargo "collections", these bonuses are based on the amount of each type cargo hold and depend on a special type of cargo. Different cargoes have different bonuses.

A percentile of money is also deducted from the sale after delivery is completed; Ron takes a 5% cut per crate of cargo sold, being between $200 and $42,500 depending on the amount of crates sold and delivered.

Sell Missions will involve players transporting the goods through air using suitable types of aircraft. In most cases, the players are required to make multiple drop offs and optionally return the delivery vehicle to the hangar for a bonus RP reward, as Charlie Reed uses the vehicles for parts. In sales involving planes, such as the Mogul and Bombushka, the CEO/VIP/MC President or MC Road Captain should enable the Formation Flying Assist through the Interaction Menu, which gives Health, Armor, and repairs airplanes to anyone inside the formation lead by one of these individuals, them included.

The cargo can be distributed into Nagasaki Havok helicopters. These compact single-man helicopters are designed to fit into tight spaces, and, reflecting that ability, are used to deliver packages of the cargo into tight areas, such as under small bridges and inside construction site areas. There can be as many as 8 Havok helicopters to fly around 2 different drop sites each - the helicopters each can carry 2 packages, allowing for 2 deliveries each journey.

Large amounts of cargo can be loaded onto the Bombushka, a large, armed cargo plane. This mission can only be started with 2 or more players as it requires a gunner to operate the three different turrets on the front, mid and rear positions. This mission requires the pilot to fly the plane over multiple drop sites, often 3 miles apart, and drop the cargo in a designated area, similar in structure to some Special Cargo missions, as well as other sell missions in this update.

Single quantities of cargo can be loaded into a container attached to a Skylift. There is only one drop site for the Skylift, although its distance away from the hangar can often be 7 miles away. The drop site can be onto a cargo ship, or, as an alternative, a series of floats towed by the Tug boat. The slow speed of the helicopter may also prevent the player from returning the vehicle, although this also depends on the hangar location.

Similar to the Skylift's capabilities, the Cargobob's hook comes into use in a particular sell mission; the cargo sold is distributed into small square containers which are to be picked up by the Cargobob and dropped off at a location per container. At each drop-off location, a Flatbed truck is waiting for the container to be dropped off. When lowering the Cargobob, the player can drop the container and will be switched to a cutscene where the container is seen been lowered onto the bed of the truck. The pilot must then return to the hangar and collect the next container. Likely due to the lack of defensive capabilities and its slow speed, no enemies will interrupt the sale. Because of the Cargobob's slow speed and size, the drop-off locations are relatively nearby compared to other sale missions. The Cargobob used in the mission is also significantly more durable than in regular gameplay (more so than the one provided in Vehicle Cargo), and bears the Jetsam livery with a gray and metallic silver paintjob. It has a longer hook than normal Cargobobs.

The Hunters provided must first clear an area being defended, and then drop the product there. This process must be repeated a few times.

Moguls will be given to drop the product at five points, given all together from the beginning of the mission. There should be two players per plane, so one can mount the 360° turret of each Mogul. Near your first drop, Ron will warn you about the cops getting wind of your shipment, sending about 3 constant Helicopter Mavericks to chase you until the end of the sale.

Depending on the amount of product sold, 5 to 20 drop-off locations will be given to the players, all of which are shared between the players involved in the sale, making them unavailable once used. Each of the Alpha-Z1 planes have been modified to automatically drop the packages on each one of the 5 drops per plane, drops which are all very close to the ground.

The Seabreeze sell mission is essentially a one-player variation of both the Titan and RM-10 Bombushka sell missions, very similar to the Mogul sell mission. It involves flying to different drop-off location, and making the drops to the buyer on ground. At ground bases, Pounder trucks will be waiting next to the drop-off flare. At sea bases, an off-shore Tug boat will be ready to collect the delivery.

During this sell mission, gray Rogue fighter planes will pursue the player and use their on-board missiles to take down the Seabreeze. As with Steal Missions, the Seabreeze during Sell Missions is much more durable than in its regular appearance. 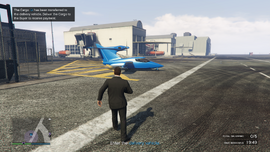 Enter the delivery vehicle.
Add a photo to this gallery
Retrieved from "https://gta.fandom.com/wiki/Air_Freight_Cargo/Sell_Missions?oldid=1224067"
Community content is available under CC-BY-SA unless otherwise noted.