Unknown
“They want to buy this place... But first they mean to destroy it.”

Agatha Baker is a character in Grand Theft Auto Online, introduced in The Diamond Casino & Resort update as a main character.

Ms. Baker has an MBA. She takes her job as the manager of the casino very seriously and stays professional when dealing with associates. However, with her own staff she can be blunt or insulting. Avery Duggan calls her a "ball buster", as she doesn't display a sign of being intimidated by the Duggans when meeting them in Casino - Strong Arm Tactics.

She seems very concerned to be linked to violent activities and expresses disgust when the protagonist is tasked with killing people. However, she's not above using violence to suit her needs, as shown in one of the Casino Work missions (Fake News), where she calls it 'amazing' when the protagonist violently mugs a critical reporter.

Agatha Baker is a businesswoman who attempts to keep away from criminal activities, or at the very least, tries not to be seen involved in criminal activities. She reluctantly goes along with the increasingly violent situation involving a buyout with the Texans, which ends in the assassination of Avery. Following the events of the buyout, Agatha seems to have become more tolerant and even appreciative of underhanded and "off the books" activities, finding it to be more effective than getting the authorities involved. At one point, she uncharacteristically asks the protagonist, in a blatant manner, to kill someone; this is opposed to her usual dialogue involving denying exactly what she is asking. Agatha also mentions becoming excited during the mission to kill the reporter.

The player can call her to access one of the following options:

“Request a work from Ms. Baker.”

This option triggers a random Casino Work mission, which can be activated by becoming a VIP/CEO of an organization or MC president.

“Request a limousine to be sent to your location.”

This option requests a black Stretch that works similarly to calling a Taxi. By default, the limo will bring the player to the casino, but one can choose a different location by setting a waypoint on the GPS. The player also has the option to hurry the limo driver or leave the vehicle at any point during the drive.

“Request a luxury car to be sent to your location.”

This option enables the player a selection of six luxury cars to use as an alternative to a Personal / Pegasus vehicle, free of charge. The car may spawn near the player and will stay on the map if the player is within a 1km radius, displayed on the map with an

The six vehicles provided by this service are:[1]

These vehicles are in different extents pre-modified, but not given with any performance upgrades. 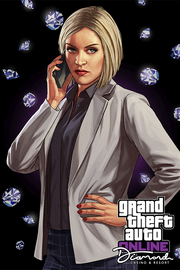 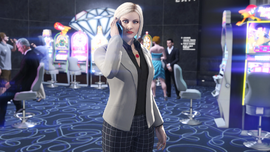 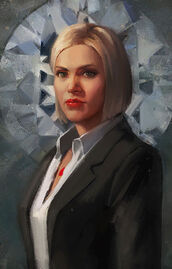 A portrait of Agatha Baker in The Diamond Casino & Resort.