The Admiral is a 4-door sedan featured in both the 3D Universe and HD Universe. It is manufactured by Dundreary in the HD Universe.

In Grand Theft Auto IV, the Dundreary Admiral sports a completely different design, now designed as a full-size luxury car similar to the Washington and Oracle. It features an American design with very subtle Japanese and German styling cues, mainly resembling a cross between a 2003-2005 Mercury Grand Marquis and a 2003 Toyota Crown Majesta, with minor influences from the Mercedes-Benz S-Class (W140), particularly the side accents. The rear faschia seems to be influenced by the BMW E23. Interestingly, the Admiral appears to be a long wheelbase model. Certain design cues were carried over from the 3D Universe Admiral, most notably the turn signals at the front and rear, which wrap around the back and side of both renditions of the vehicle.

The Admiral is equipped with a GPS system with a male voice, but only if the player leaves the "selected cars" (default) option in the audio menu.

In Grand Theft Auto: Chinatown Wars, the design of the car depends on the platform:

In the 3D Universe, performance wise, the car is generally acceptable with light weight, stable handling, and good acceleration and top speed, to the point it is offered as a starter car which the player may first control in GTA Vice City. Surprisingly, it is front-wheel drive, in contrast to the Mercedes 190 or BMW E30 which are both rear-wheel drive, making it quite susceptible to understeer. However in the transaction cutscene in Vice City one can notice that after Tommy leaps in through the window and Rosenberg drives away, the rear wheels swirl before he drives away

In GTA IV, it is powered by what appears to be a large V8 engine, with a RWD configuration coupled to a 5-speed transmission. Acceleration is average and handling is as to be expected; the sheer weight and the comfort-oriented suspension does have its disadvantages. Despite this, the Admiral has decent ground clearance and a wider stance, allowing it to sort out rough surfaces better than most cars in its class. Additionally, the top speed is rather impressive for its type, although it takes a long time to stop the heavy saloon completely after letting off the throttle. However, the car is very resilient to crashes thanks to its bulky construction, and the weight is also useful for ramming other vehicles off the road. This, in addition to its high top speed make it a good vehicle for getaways and pursuits.

In GTA Chinatown Wars, the Admiral retains the performance from GTA IV. The Triad variant sports upgraded acceleration and top speed as well as a smoother engine sound and a different horn from the base model.

The Admiral can only be modified in TransFender garages: 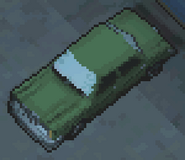 An Admiral in the DS version of Grand Theft Auto: Chinatown Wars.

A wrecked Admiral in GTA IV.

One of the black Admirals from Check Out at the Check In and Loose Ends. (rear quarter view)