The airline has the rather dubious slogan, Say your goodbyes!, suggesting that passengers are unlikely to survive the flight. In addition to this, the word adios is a farewell remark in Spanish, and the airliner's logo might represent a waving hand.

They are mostly yellow with small orange accents, and feature the "waving hand" logo on the tailfin, along with the Adios Airlines text on the side of the airplane's fuselage. They have a similar colour scheme to that of airplanes owned by the international mail company DHL Express, although the yellow and orange colors, as well as the airline's Hispanic origins, are likely also inspired by Iberia.

Adios/FlyUS as a service for Travel Agency. Sign in Russian and in English. (Another) 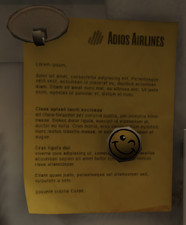