The Adder is heavily based on the Bugatti Super Veyron concept, as seen in the general shape and rear fascia. The design of this car also has some resemblance to the Saab Aero-X in terms of the wheels, headlamps, and front fascia. The front fascia and partially the headlights also bear a resemblance to some of the 2007-present Jaguar models, as well as the speculated concept. The tail lights are based on typical Aston Martins, as they have flattened C-shaped tail lights. The roof ducts have been almost directly taken from the Veyron Super Sport.

The design of the car leans towards a bulky profile in comparison to most supercars, yet retaining aerodynamic features from these. The front bumper features large ducts near the base, featuring chrome trims passing on the upper side and leading to the outer edges. The bumper's bottom edge is raised for the width beneath the main grille, which seems to bear a black/polymer extender on it. The main grille is depicted as a wide, curved trapezium-like element, with the Truffade emblem mounted centrally on it. On the upper area besides the grille, a set of circular headlamps can be seen on black housings, each one consisting of twin main lamps and an outer turn signal.

The sides of the car are made up completely from curves, with the wheelbase having a long impressed area not far above it, leading to an air duct and above this there is a main body curve, which runs along the base of the door and then heads up to the top of the car's sides, having mesh intakes leading to the engine bay. The wheel arches feature flat faces, but are heavily flared from the body at the rear. The windows of the greenhouse area continue the curvy theme of the car's design, curving downwards towards the rear while bearing polymer details and carbon-fibre mirror shells. The roof features two ducts also finished in carbon fibre and four small rectangle vents. The rear section of the cabin features a completely curved outer profile, with a central vertical fin over the engine bay area, just behind the rear windscreen.

The rear face features a central brake light strip at the top with two wide C-shaped lights on either side, with their top edges coinciding with the bottom edge of the central strip. The rear lights are fully red, having no clear indication of allocation for reverse lamps. The license plate is mounted centrally between two wide D-shaped air ducts that help the engine breathe. The base of the rear bumper features a large polymer-covered area with two large quadrilateral-shaped exhaust tips mounted centrally.

The Adder’s interior uses the same "Super GT" textures and dials also used on the 9F and Rapid GT, albeit featuring a Truffade emblem on the right-side dashboard, as well as the Truffade 'T' logo on the steering wheel.

The Adder is prominently painted in a primary colour for the bodywork and the stitches on the interior, while the secondary colour will be applied in the form of twin stripes on the bonnet and a panel on the rear. Interestingly, the rear panel gives the impression of an apparent pop-up mechanical spoiler (a feature derived from the Bugatti Veyron), but unfortunately, the Adder does not have this feature. The rims have a unique design, consisting of 20 spokes that alternate between wide, semi-curved spokes and thinner, straighter ones.

As befitting the car's real life counterpart, the Adder boasts exceptional engine power, so much that it remains among the best-performing cars in a straight line. However, the car is somewhat sluggish around corners, owing to its prominent understeer. Its poor handling is exacerbated by the absence of a spoiler upgrade. It can be difficult to utilize the Adder’s top speed due to its subpar acceleration, being outpaced by most supercars in that respect. Fortunately, the Adder’s AWD layout partially alleviates these shortcomings, helping to jolt the car forward from a standstill and provide additional stability at high speed.

The large chassis and overall shape gives it a strong and rigid design, which is something the player would want when crashing or colliding. The deformation rate is slow, though the wheels tend to lock up or give a positive camber when done so. The front of the car also has a tendency to "slip" or skitter off other cars it touches when at high speeds.

Fully-upgraded, the car tops out at just under 125 mph on flat road. Although once the fastest supercar in a straight line, it has since strayed far from first position, beaten by over a dozen others ranging from the FMJ, Visione, and Tezeract up to the Banshee 900R, Deveste Eight, and 811.[2]

The Adder features two side-by-side engine covers derived from the 9F (albeit laid backwards), intended to emulate the W16 engine from the real-life counterpart. Said engine is coupled to a 6-speed gearbox and is laid out longitudinally in a mid-engine, all-wheel drive layout, giving the car some excellent take off and traction. The engine sound is shared with the 9F, being a high-revving sound with a muffled exhaust note. The website states that the Adder boasts an 8-liter engine, pushing 1100bhp to the wheels, giving it what was originally stated to be a top speed of 250mph. However, the website as of an enhanced version patch states it can reach up to only 215 mph. In-game, the Adder cannot reach either of these speeds under normal circumstances.

The black and orange Adder parked at Portola Drive.

The white and blue Adder parked at Portola Drive. 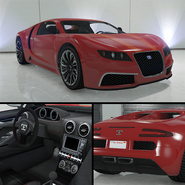 The Adder on Legendary Motorsport.

The Adder as seen on the Legendary Motorsport website. Note the spoiler.

The Adder on the updated Rockstar Games Social Club

The Adder in the cinematic preview on Rockstar Games Social Club.