Jamie Canfield
“Is it perfection we're seeking? A race of pop-singing, big-haired supermen and women who bestride the world in 3-minute movies? I've had it with these abbreviated operas for the modern world! Is it a good or a bad thing? Will the fat lady sing? You must decide that for yourself.”
— Adam First hosting Wave 103 in 1986

Like most DJs in Vice City, Adam believes that his kind of music is the best, and fancies himself a music connoisseur. In Grand Theft Auto: Vice City, he mentions his liking for money, is a big fan of hang gliding, despises music videos because they show that the artists' looks are more important than talent, and insists that his mother had nothing to do with his personal choice of going into radio.

Similar to the situation with the earlier version of V-Rock, Flash FM and Emotion 98.3 circa 1984 in Grand Theft Auto: Vice City Stories, Wave 103 in that game features two hosts, the British Trish Camden and American Adam First, who have conflicting personalities which lead to much argument on the radio. Adam believes that radio is better than music videos, whereas Trish's point of view is the opposite. Trish also mentions that Adam likes to wank (jerk) off to New Order's "Blue Monday".

Adam is implied to be a programmer and a mathematician, as during the intro to Depeche Mode's "Everything Counts", he mentions having written a program on his Fruit LC computer where a triangle flies across the screen and turns into pixels, and he favorably compares Heaven 17's song "Penthouse and Pavement" to calculus.

Adam makes a cameo appearance in Grand Theft Auto: San Andreas as a caller to the conspiracy theory show Area 53 on the West Coast Talk Radio in 1992. He says that while hang-gliding in Bone County, he saw a man at a trailer compound performing strange rituals with a Domestobot. The show host Marvin Trill (who is later revealed to be the man that Adam saw) tells him to get a real hobby, and hangs up. 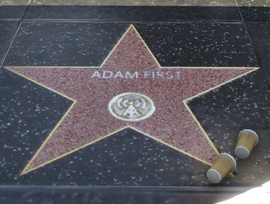 Adam's star on the Vinewood Walk of Fame in 2013, as seen in Grand Theft Auto V.