Unknown
“Be staying away from me!”
— Adam Dimayev shouting at Niko Bellic before getting killed.

Adam Dimayev (Russian: Адам Димаев) is a Russian criminal based in Liberty City in Grand Theft Auto IV. He is wanted by both the Liberty City Police Department and the United Liberty Paper, an undercover government agency, for financing terrorism in the city.

He is encountered during the mission Portrait of a Killer by Niko Bellic, when Niko's contact at United Liberty Paper orders him to find Dimayev using the LCPD Database and kill him. He is located near a small garage in East Island City, Dukes, surrounded by bodyguards. During a brief follow-up phone call with his contact, Niko is ordered to kill Dimayev and all the guards. If given the chance, Dimayev will run up two ladders to make his final stand on the roof of a nearby building, requiring the player to kill off all of his guards first. However, if the player kills Dimayev before his guards are massacred, the last Russian goon will drop his gun and the player is given a choice to possibly spare his life.


- Believed to be head of a car stealing ring based in Dukes.


- Wanted for questioning by the Russian government in connected with the bank rolling of terrorist activity around the Caspian Sea.
LIBERTY CITY POLICE DEPT.
PROTECTING LIBERTY CITY 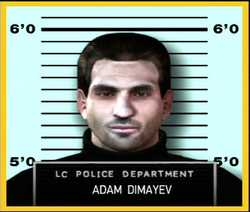 Dimayev just prior to his death. 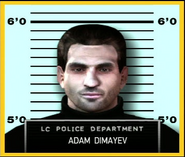