In-game time
“Slow down? Hold up, wait, ooohhhh. Jesus, physics lesson, fuckball. Do you know how motorcycles work? Do ya Johnny? (-You about to get schooled. - Brian Jeremy), Centrifugal inertia. Meaning the quicker your wheels go, the more stable you are. The faster we go, the harder we hit it, the more us brothers pull together.”
— Billy Grey to Johnny Klebitz.

Action/Reaction is a mission in The Lost and Damned. It is given by Billy Grey to Johnny Klebitz.

At the start of this mission, Johnny finds Ray Boccino, from GTA IV's main storyline, talking with Billy Grey. Johnny is introduced to Ray, and immediately afterwards, Billy decides it's time to inflict pain on The Angels of Death for supposedly killing Jason Michaels, despite him saying in a previous mission that the person to blame was an "Eastern European".

The motorcycle club arrive at the Angels of Death Clubhouse and Johnny is given a Grenade Launcher to shoot through the window. After the explosion, a group of Angels of Death members attack The Lost. The Lost MC kill all enemies outside and Johnny goes into their clubhouse to kill all of their remaining members. After all are killed, Billy and Brian come in and Johnny finds out that Billy didn't want to take revenge but to take the drugs.

After the cutscene, Johnny will be teleported to the Hexer in the alleyway to the left of the Lost MC clubhouse, along with Terry, Jim, Clay, Brian and Billy. After driving a little while, Johnny suggests a race, the winner being the one to reach the Angels of Death Clubhouse first.

Once everyone's on scene, Billy will hand Johnny a Grenade Launcher and tell him to flush out the AOD members inside. Firing a single grenade into the open window marked with an arrow of the Angels of Death Clubhouse suffices, and the explosion starts a fire. This flushes several of the AOD members out into the open where they engage in a firefight with the Lost MC. At this time, the player must fight and finish off the stragglers. Once all is clear outside, Johnny and Billy head inside to clear out the remaining forces. They clear out the remaining enemies in the bar room, the hallway, and downstairs in the basement workout room.

Upon reaching the basement, a large heroin stash referenced as being $2 million in value is discovered. It becomes apparent to Johnny that all of this was a ruse by Billy - the killing of Jason was indeed by an Eastern European, and the attack was instead about scoring the heroin stash, already owned by the Triads. Regardless, what's done is done, and Johnny is ordered back to his bike, and the Lost leave the area as the LCPD arrive on scene to investigate the aftermath. 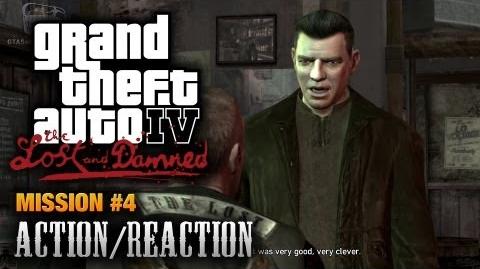