Beth Chamberlin
“It may surprise you to learn that along with being a beautiful, finely put together woman, I am also an expert in nautical engineering and glass degradation.”
— Abigail Mathers

Little is known about Abigail's life prior to the events of the game. At an unknown point in time, she became the assistant of Frank Mathers, a TV producer and married father-of-five. They began an affair in 2009, leading Mathers to walk out on his wife and children and marry Abigail.

Abigail can be found at the Sonar Collections Dock. To activate her mission, the player must purchase the docks for $250,000.

When Michael first met her, Abigail talks about the recent death of her husband, who drowned while he was testing a submarine. Michael mentions rumors that someone tampered with the airlock, which Abigail quickly denies, claiming nothing was ever proven. She then asks Michael to find all the pieces of the submarine, so she can prove that Frank is dead and collect his life insurance, and also be able to "sleep much easier".

When Michael comes back to her with all the Submarine Parts, she's surprised to find a piece of evidence that suggests sabotage. She then claims that the police are in on his death and declares her intent to take the findings to the FIB. She rewards Michael with a mere $10 and a rare signed autograph from her husband, much to Michael's frustration. The player then has the option of killing her or just letting her go. Whilst being pursued, Abigail reiterates that she did not kill Frank but if the player follows her, she will travel to Los Santos International Airport rather than the FIB Headquarters, implying she killed Frank and intends to flee the state before the FIB puts two and two together. If she is followed to the airport, she will leave her vehicle and claim that Michael is harassing her, triggering a three-star wanted level. 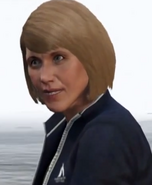 Abigail talking to Michael during Death at Sea.