A Titan of a Job

A Titan of a Job

(Cash and RP will vary depending on time spent completing the mission, the number of players involved, and whether players are in the same crew.)

(27 initial enemies, + 10 backup enemies when 1 protagonist climbs aboard the Titan)

“I assume you've heard of Merryweather Security? Those warmongers for hire making billions in the Middle East? Well, now they're trying to expand their domestic operations. Some associates of mine are prepared to pay top dollar for a Titan transport plane if it can be relieved from Merryweather's protection at Los Santos International. Use a helicopter to get into the airport and stay out of restricted airspace. The buyers are waiting at Sandy Shores Airfield.”
— Description.

A Titan of a Job is a mission in Grand Theft Auto Online given to the player by Lester Crest.

Merryweather Security are trying to expand their domestic operations. Just like in GTA V, Lester has a strong dislike for them, planning several heists and jobs against them. Now, Lester is interested in a Titan plane that Merryweather is keeping at their security hangar in the Los Santos International Airport. Lester's buyers will pay a lot for the plane when delivered. When the team arrives at the airport, the team isn't obliged to go to the hangar with a helicopter as Lester had advised; they can simply use a ramp at the airport's air-side area main entrance with a car. It is advised to snipe as many soldiers as possible with a sniper rifle while remaining away from the hangar. Once all of the soldiers are dead, the team must raid the hangar and dispatch any additional soldiers, move the semi truck blocking in the plane, and fly the plane to the Sandy Shores Airfield where Lester's buyers are waiting for them.

Players will not be pursued by Merryweather in-flight; however, the hangar will be reinforced by three Merryweather teams in Mesas if players do not take off immediately after activating the plane.

Once the player begins the mission, they need to steal the Titan. They will need to reach Los Santos International Airport, where the plane is stored in Franklin's hangar - the southernmost open hangar.

Once they have reached the airport, they will need to take out the surrounding Merryweather security guards. They will be located around the plane itself, as well as around the hangar. A plane is located to the left of the hangar, along with a black Patriot and several guards. One the right side of the hangar is another group of guards along with another Patriot. In front of the Titan is a large curtain-box trailer hooked up to a semi-truck, which is blocking the Titan from escape. It is recommended not to destroy the truck so it can be moved easily later on. Several containers are found at the right of the plane, with more security units hiding behind, along with a Dock Handler behind. A security guard is also located on the left side of the raised platform which follows the inner perimeter of the hangar. It is recommended to snipe these units from the runways of the airport, taking out the majority of the visible units, before approaching the hangar and eliminating the rest of the crew. Several units may run towards the play in attempt to get a close-up shot.

Upon entry of the Titan, the player is told to take the aircraft to Sandy Shores airfield. The destination is marked on the map as a yellow dot. When the Titan begins to exit the hangar, a Mesa with several armed units will chase the plane, and, upon reaching the main runway, second and third backup units will pursue. In order the avoid these, the player is recommended to take off immediately and avoid ramming into the jeeps. Or, alternatively, if there are friends to help, the pilot should tell them to dispose of the jeeps.

Now the pilot must fly to Sandy Shores airfield, avoiding any tall infrastructure which may pose a risk to the aircraft's sensitive fuselage and wings. Any players who remained on land should either risk tackling the remaining ground units (if there are any), or flee from the scene.

Once the pilot reaches Sandy Shores airfield, they have to land the aircraft. Approaching the runway in a straight line, with enough height to avoid the height of pylons and telegraph poles, whilst also being low enough to manage a perfect landing - the nose of the aircraft must be pointing straight ahead and not directly towards the runway surface. Slowing down is key, but stalling the aircraft altogether could allow the plane to nose dive and crash - enough throttle is to be applied in order to maintain the plane's landing. After the plane touches down, it is advised the player lifts the ailerons and elevators in order to slow down the plane to a complete stop. The yellow marker will be marked just outside the hangar, where the plane should be stopped within. Once reached, the player will exit the aircraft and the mission is complete.

A Titan Of A Job.

Location of the Titan on the map.

Moving the truck out of the way.

Preparing to take off.

Location of Sandy Shores Airfield on the map. 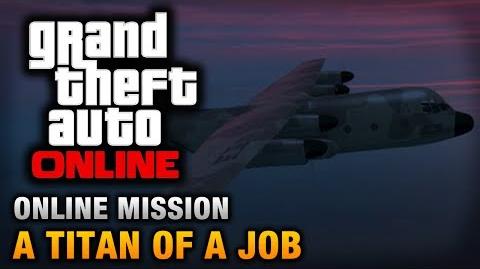 GTA Online - Mission - A Titan of a Job Hard Difficulty