Ownership of a Galaxy Super Yacht

A Superyacht Life is a series of six missions featured in Grand Theft Auto Online as part of the Los Santos Summer Special update, released on August 11, 2020. They are given to the players by Brendan Darcy, the captain of the player's Galaxy Super Yacht, and are available for 1 to 4 players.

These missions revolve around the player assisting Captain Brendan Darcy in his various duties, dealing with things such as collecting undersea cargo, retrieving stolen property, and assisting wealthy clients. The missions are only available from the yacht bridge or by calling the Captain and requesting a job, until they are all completed, then they will be added to the Jobs section of the Pause Menu. 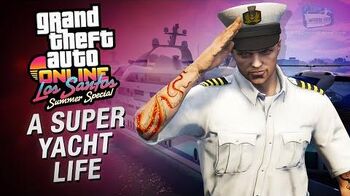