• ­Operate the controls to open the cargo hold.

• ­Go to the cargo hold and get revenge on Dimitri.

Dimitri: "People aren't going to be happy if you kill me, stupid motherfucker."
Niko: "I've never been popular. I don't mean to start now."
― Dimitri Rascalov fruitlessly tries to scare Niko Bellic before he kills him

A Dish Served Cold is one of the final storyline missions in Grand Theft Auto IV, if the "Revenge" ending is chosen. During the mission, Niko Bellic kills Dimitri Rascalov onboard the Platypus, which is the ship that brought Niko to Liberty City.

During a meeting with Jimmy Pegorino, Niko had found out that he is being forced to do a heroin deal with Dimitri Rascalov. Niko decided not to take the deal and instead commit revenge against Dimitri after finding out from Roman that he is on board the Platypus. He goes over to the Platypus, which is docked in East Hook, and a violent shootout occurs, killing every single one of Dimitri's men and Niko eventually corners him in the ship's hull. During the standoff, Niko wounds Dimitri, who then begs for his life and tries to bribe him. Niko is unconvinced and kneecaps Dimitri before shooting him in the head, killing him instantly. 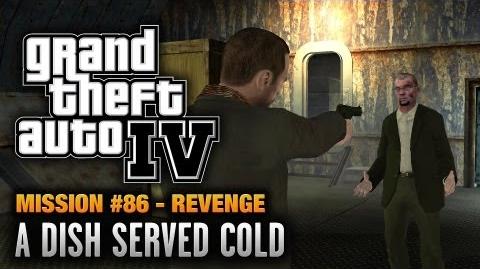 There is no reward for this mission. Niko will call Roman and Kate. He will tell Roman that Dimitri is dead, mentioning that it "ended where it began", and Roman, somewhat wistfully, replies by saying that they'll get no money but is grateful that Dimitri is no longer around to bother them. Shortly after, Phil will call Niko and say that he heard about what happened and he understands why Niko killed Dimitri and for what it's worth, he also didn't trust him. As a result of falling out with the deal, however, the Pegorinos are falling apart, and Niko can't talk with him anymore, adding that he's out of the life of crime. Later, Niko will call Kate and tell her he didn't go through with the deal. She replies that he did a good thing, and that it must have been difficult to stick to his principles, adding that she'll be coming to Roman's wedding.

1. Niko: I killed Dimitri, It's over. He was on the Platypus, the boat I arrived to Liberty City on, so it seems it ends where it began.

Roman: I guess you did what you thought you had to do, no deal, no money, no hot tubs and models, but Dimitri will not bother you again, I will see you at the wedding yes? Remember to wear a suit.

2. Phil: Hey, it's Phil, I understand why you made the decision you did. For what it's worth, I didn't trust that Dimitri neither.

Phil: Anyway, you and me can't talk no more. Jimmy's fallin' apart and the Pegorino's ain't nothin' no more, I'm out man, goodbye.

3. Niko: Hey, Kate. I took your advice. I cut my connections with that man.

Kate: I'm really proud of you, Niko. It must have been really hard to turn down the money and stick to your principles.

Niko: Well it was the right thing to do. Are you coming to Roman's wedding?

Retrieved from "https://gta.fandom.com/wiki/A_Dish_Served_Cold?oldid=1008419"
Community content is available under CC-BY-SA unless otherwise noted.