In-game time
“The great businessman of our time have the ability to sell you what you do not need. You like to walk? I'll sell you a car? You have a car? I sell you one in a stupid color with a spoiler. Next, a motorbike. No one needs a supercharged ATV, so I hope to sell them in the thousands. But first I need you to get me some that are being raced near Raton Canyon. Bring the full set to Paleto Cove and I'll pay handsomely.”
— Description

ATV Steal was a mission in Grand Theft Auto Online given to the player by Simeon Yetarian. It was available for up to 4 players.

Simeon has loaned out four Blazers to a group of freelance racers and adrenaline junkies set up in the Chiliad Mountain State Wilderness. They haven't paid for them and are beating them up by running them down mountain trails - and Simeon wants them back. He tasks the player(s) with retrieving them.

The mission was less time-consuming with more players, as there are four target vehicles. 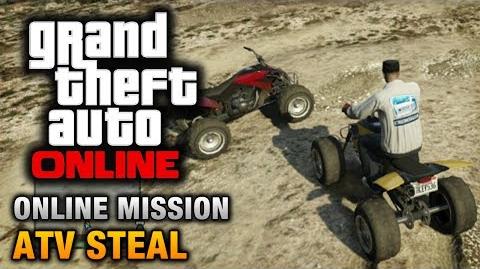