2 (pilot and one passenger)

Parked
The AT-400 is a jet airliner featured in Grand Theft Auto: San Andreas and the largest vehicle in the game. It is the first controllable airliner in the series and the second airliner that makes an appearance in the series, following the uncontrollable Airtrain.

The AT-400 is mostly based on the Boeing 737-400 commercial airliner, an accurate rendition as the 737-400 entered service in 1988, four years before the game's set. However, the AT-400 itself appears considerably short, with a shorter row of cabin windows than the 737-100, the shortest model of the 737 family. The aircraft is obviously the biggest vehicle of the game, and is unrealistically much bigger than the Andromada.

The only known operator of this aircraft is Juank Air; however, unlike the Nevada, it does not feature the Juank Air livery, and instead possesses a two-tone body paintjob. The jet has a two-tone body style, the first color covering the sides of the fuselage, the wings, the stabilizers and the rear part of the engines. The other color covers the rest: the upper and the bottom of the fuselage, the tail and the front part of the engines. The AT-400 will spawn in a grey primary color with either red, blue or green secondary color. A fourth color combination is a dark green primary color with dark red secondary color, which is usually used for NPC-controlled flights and rarely spawns in the hangar at Las Venturas Airport.

The AT-400's enormous size and sluggish response makes the plane harder to control, similar to the Andromada. Nevertheless, the AT-400 can reach impressively high speeds in the air and can in fact be used to execute stunts, including barrel rolls and loop-the-loops. Caution should be exercised when the plane is on the ground; it easily gains a lot of momentum and can be difficult to bring it to a stop once it gets going. Unlike most other planes, the AT-400 can be flown over Area 69 with less chance of being shot down by homing missiles, providing the player does not hang around. The AT-400 is one of the toughest vehicles of the game (not as tough as the Rhino however), being able to withstand between 8 to 11 hits from the SAM sites before blowing up and falling from the sky.

A primary disadvantage of this plane is once the player lands and exits, getting back in is difficult because the door is very high from the ground. The only ways one can get back in are to find a Baggage with a ladder attached to the back, land the plane at Las Venturas Airport and go to the hangar again, or find a large van such as a Yankee and jump over it, using its hood as a platform.

A parked AT-400 at the Easter Bay Airport, with a Utility Van parked nearby for size comparison. 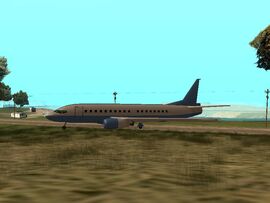 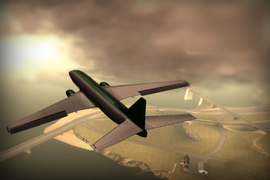 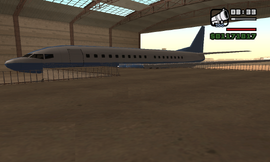 The AT-400 at its hangar in Las Venturas International Airport. 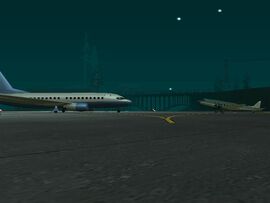 Size comparison between the AT-400 and the Nevada. 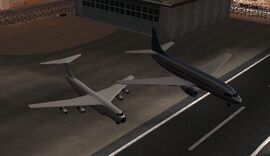 Size comparison between the Andromada and the AT-400.