• ­Only in Native Zone

"Recently acquired in a Fort Zancudo yard sale, all our APCs come direct from active service. Equipped with a turret-mounted cannon and portholes for small arms fire, they're able to carry up to four heavily armed mercenaries pretty much anywhere across land or water. And if you squint it's quite good-looking, in a merciless-occupation-of-your-homeland kind of way."
―Warstock Cache & Carry description.

The HVY APC (Armored Personnel Carrier) is an armored assault vehicle featured in The Ballad of Gay Tony and in Grand Theft Auto Online, as part of the Gunrunning update.

As The Ballad of Gay Tony restores the over-the-top style of Grand Theft Auto: San Andreas, the APC was created to fill a role similar to GTA San Andreas' S.W.A.T. Tank and the Rhino.

In GTA Online, the vehicle is manufactured by HVY and is no longer utilised by the NOOSE. Instead, it appears as a military-style vehicle with no signs of markings for military usage or operations.

"Nothing says "I've made it in this town" like a N.O.O.S.E armored personnel carrier, equipped with a 360-degree rotatable turret and explosive ordnance."
―Official website description

The body of the APC bears a striking resemblance to the Soviet BRDM-2 scout car, lacking the 14.5mm machine gun and utilizing a 73mm cannon firing sabot explosive rounds instead, with the front and cab design from a BTR-80, with side doors from a Cadillac Gage Commando. The APC features unusable panels intended to cover the windows and periscope-like windows over the main ones when these panels are closed (a feature similar to the BTR-80). Also, there are unusable hatches on the top. As seen in the mission Caught with your Pants Down, the APC has four hook points for winching. The interior lacks any type of dashboard or interior textures, having only two seats that, oddly, appears to have a carbon-fiber appearance.

The vehicle labels NOOSE decals, red strobe lights, an amber beacon light and an explosive cannon turret mounted on top of the APC.

The APC returns mostly unchanged, however the side door has been removed, and instead features four hatches on the roof; two for the front driver and main gunner, and two for the gunners in the rear, giving the vehicle a total capacity of 4, 2 more than the APC in TBoGT (said configuration also replaces the upper vents of the vehicle, leaving only four vents rather than six). The default NOOSE livery is removed, and in place, numerous liveries can optionally be applied to the vehicle. It features a tow hitch on the rear.

The vehicle can be heavily modified to sport an anti-air missile launcher. With the additional launcher, the vehicle can be said to take influence from the SA-9 "Gaskin"; a variant of the BRDM-2 APC featuring the 9K31 Strela-1 missile system. The weapon system appears to take inspirations from the 9K31 Strela-1, a highly mobile, short-range, low altitude infra-red guided SAM system, but with two extra launchers on it, similar to the 9K33 Osa in that aspect.

The APC's performance is what is expected from a large APC; a deadly vehicle. The vehicle has a moderate speed, which is beneficial for aiming at targets and for control. The vehicle's heavy weight means it is deadly to other road users, it can ram other cars out of the way with little trouble, however, cars tend to become stuck under the vehicle's front area, meaning the APC eventually suffers by slowing down, and reacceleration can be costly.

In terms of handling, the APC has a moderate turning radius; it can turn rather quickly, but the loose suspension tends to cause the entire vehicle to lean to one side, but again, thanks to its weight, it does not seem to roll-over when cornering, and its top speed is low enough to avoid this. Braking is what is expected for a vehicle of its size; moderate. The vehicle tends to lag in braking, and cannot be avoided unless cruising at even lower speeds. Because of the shovel-shaped front and high suspension, the APC can sort small barriers easily.

The main turret on the vehicle is very powerful. While not causing explosions as loud, big and instant as the Rhino in past GTAs, the cannon is much faster and therefore better for causing chaos and destruction in large proportions. The fire rate is similar to that of the Valkyrie featured in Grand Theft Auto Online, and the sound is also a lower-pitch sound of the aforementioned helicopter. The damage of the turret is notable, wherein it takes an average of 5 to 6 shots (depending on the vehicle's durability and size) before the target vehicle bursts into flames. At constant firing, it usually takes around 20 shots before the vehicle finally explodes (although, leaving the vehicle in flames also leads to it eventually blowing up, regardless of how many more shots are fired). The shots it fires cause not only damage to the engine of target vehicles but also, to the bodywork; dramatically. The target vehicle's body will deform majorly when shot at, with rear ends, front ends and roofs twisting and deforming. In terms of targeting pedestrians, the APC somewhat fails. Although the fire-rate of the APC is very fast, the explosion size is similar to that of a sticky bomb, and due to the lack of any type of aiming dot, the accuracy is minimal. It somewhat fails at killing pedestrians in one shot when they are eventually hit by an explosion. It should be noted that the APCs firing range is actually infinite, similar to the Heavy Sniper in GTA V, however the render distance for the explosion is relatively small, thus making it hard to aim at distant targets.

The turret rotating speed is very fast, and even faster in the PC version thanks to mouse control. This allows the APC to be very tactical and strategic, and allows the player to be fast at reacting to attackers. The upwards and downwards movement of the APC, however, is very restricted, so aircraft are tricky to target unless they are low flying, leaving the helicopter able to whittle away at the APC's health, with relative impunity.

The engine sound is loud and powerful, and sounds to be similar to a diesel engine. It does not rev that high due to the weight of the vehicle and nature of the engine, however it provides a large amount of power to all 4 wheels through two differentials, in an equal distribution (50-50).

The APC is capable of withstanding before catching fire, as tested, roughly 7,130 shots from a machine gun to the body, 350 to its engine compartment, 2 grenades from a grenade launcher, 2 RPG grenades, and 11 sticky bombs on the ground.

The vehicle's handling has been overhauled, performing similar to other similar sized vehicles, particularly the Insurgent Pick-Up. Its size is no problem for its ability in speed and power, and the vehicle now features nimble handling and a large increase in suspension dampening, meaning the vehicle suffers from much less body roll and pitch than in TBoGT. Durability is still superior to many large vehicles, although not as tolerable as the Rhino Tank. Another ability the APC features is its amphibious capabilities. The vehicle can be fully submerged without damage, but will return to and float on the surface. It can be driven around on the water and remains fully functional.

The passengers on the back can use a unique machine gun while remaining inside the vehicle, providing excellent defensive capabilities, although a ~90° coverage and limited elevation angle. Additionally, the main turret is no longer usable by the driver and instead, the front passenger can operate this weapon, making it an efficient team-oriented vehicle. However, players may get hurt with gunfire, as the windows are no longer bulletproof.

The engine sound is also different. Rather than the smooth engine sound from TBoGT, the APC now has a noisy engine that closely matches with that of a real-life APC.

A parked APC in TBoGT.

The APC featured in Frosting on the Cake with a machine gun turret.

Screenshot of an APC driving through the Booth Tunnel.
Add a photo to this gallery 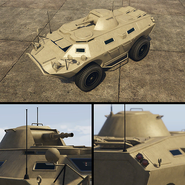 The APC on Warstock Cache & Carry.
Add a photo to this gallery

The APC can only be modified at a vehicle workshop inside a bunker[citation/verification needed] or a Mobile Operations Center.

Retrieved from "https://gta.fandom.com/wiki/APC?oldid=1001098"
Community content is available under CC-BY-SA unless otherwise noted.