Though the Assault Rifle had several changes over the course of the games, it retained most of its characteristics, including the detailing of the barrel and the sight placed right at the end of it. The main shape of the trigger group remained the same and the curved magazine was one of its distinctive features. As for its general reception, the Assault Rifle was always the cheapest and most traditional assault rifle of every game, as opposed to the more contemporary and expensive Carbine Rifle, as well as being a common sight in the hands of many gangs in the later missions throughout the games.

Though it seems to be identical in each game, certain features make every AK-47 based on different models.

The following is based on Grand Theft Auto: Vice City cut content and has not been verified by canon sources. Reader discretion is advised.
Please do not add unverified or speculative content to this article unless confirmed by Rockstar Games or in-game data.

Grand Theft Auto: Vice City is the only game in the 3D and HD universes not to feature an AK-47, which was cut and replaced by the Ruger. However, the weapon model and textures still remain in the game files (ak47.dff and ak47.txd). These files contain the same texture and model as the GTA III variant and it seems the developers were planning to reuse the GTA III model. Additionally, a differently modeled AK-47 (specifically a Norinco Type 56, similar to the GTA San Andreas version) can be seen among other weapons on the shelves/racks inside Ammu-Nation.

The Grand Theft Auto IV rendition is mostly an accurate representation of the AK-47 in size and look, although some pins on the receiver are depicted at the wrong place, the fire selector is on safe, and the bolt carrier group is missing a handle. Since its appearance in the HD Universe, it is named Assault Rifle.

The Grand Theft Auto: Chinatown Wars rendition appears to be a regular AK-47. The upper handguard of the weapon has been removed, revealing the gas tube. These details are shown when it is found in a Dustbin.

The model of the Assault Rifle in Grand Theft Auto V and Grand Theft Auto Online is a Norinco Type 56-2, which is basically a Chinese version of the AK-47 fitted with a side-folding stock. However, it is depicted with a gas block similar to that of the AK-74 and the AK-103. It no longer features wooden detailings, and is fitted with Picatinny rails for attachments.

In general, the AK-47 is an all-around powerful weapon, dealing considerable damage and having a good rate of fire. A headshot will always behead normal targets. It does, however, suffer from tremendous recoil and accuracy problems at long range. Furthermore, despite firing 7.62mm rounds in reality, the AK in the 3D Universe is generally less powerful than the M4 / M16.

In Grand Theft Auto III, the AK-47 behaves rather differently from later games, as it is depicted with a very high rate of fire but low damage, similarly to the MAC-10 featured in later games. Unlike the M16 (and unlike the Ruger from Grand Theft Auto: Vice City), it cannot be aimed in first person. It has lower recoil than the M16, but other than that it is outclassed by it, as the M16 deals way more damage and has a much higher fire rate than it, as well as having double the AK's magazine capacity.

In Grand Theft Auto: San Andreas, the AK-47 has a lowered rate of fire, but deals more damage than its GTA III counterpart. It is as powerful as the M4, but the latter remains superior to it since it has a 50-round magazine as opposed to the AK's 30, as well as better accuracy. However, the AK-47's weapon skill increases faster than most other weapons. By inspecting the ar_stats.dat file, it can be verified that the AK-47 gains 3 skill points per bullet that hits a legitimate target. The only comparable guns are the Silenced 9mm and the Desert Eagle, which gain 5 and 3 points per bullet respectively. The pistols, however, have a much slower rate of fire. Likewise, the AK-47's main competitors, the MP5 and M4, gain 1.5 and 2 points per bullet fired. For reference, 1000 skill points are required to reach the 'Hitman' level.

Like almost all other guns, this weapon ensures a 1 headshot kill in single player and in multiplayer, a 2 headshot kill. The Assault Rifle has greater power, in contrast to the Carbine Rifle's greater accuracy. The extra firepower is not much in comparison to the Carbine Rifle and is not required since a single headshot from any weapon will kill any enemy. The Assault Rifle in GTA IV strangely has two reload animations. When Niko is standing while reloading, he will cock the gun with his left hand, but when he is crouching while reloading, he will take "out" the magazine, puts "another" one in and cocks the gun. It is unknown why two reloading animations are present. These two reloading animations are also present with the Carbine Rifle and the Assault Shotgun.

In Grand Theft Auto V and Grand Theft Auto Online, the Assault Rifle is weaker than the Carbine Rifle. It also has less accuracy and fire rate than the aforementioned weapon, resulting in a low efficiency weapon. At early stages of the game, the Assault Rifle proves to be useful for long-range assaults and performs better than handguns and submachine guns, but at later stages, it is easily outclassed by other assault rifles.

The weapon by default has a 30-round magazine, which can be replaced with a 60-round magazine. In Grand Theft Auto Online, as of the Further Adventures in Finance and Felony update, it can be further upgraded with a 100-round drum magazine, which offers as much supression fire as an MG with "Extended Clip" or a Combat MG with "Default Clip", at the cost of a slightly increased reload time.

F Free for players that have the Special/Collector's edition of the game.
* These Tints can also be unlocked by bringing the Assault Rifle to any Weapon Workshop.

The Assault Rifle on the Ammu-Nation's stock (GTA Advance)

The unused AK-47 found in the Grand Theft Auto: Vice City game files. Note that it uses the same textures from GTA III. 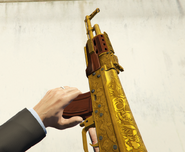 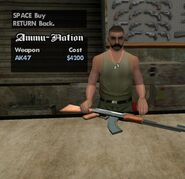 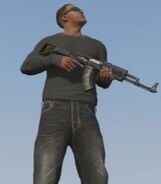 Franklin Clinton with an Assault Rifle.

The Assault Rifle at Ammu-Nation.

A crate of unloaded Assault Rifles in a GTA Online character's office. Notice the green tint. 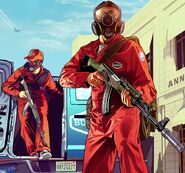 The Assault Rifle in the hands of Trevor. This one appears to lack a stock.

A target using an Assault Rifle.

A character firing an Assault Rifle.