Standard White - 100%
“There's nothing wrong with the standard Obey 9F, but this is San Andreas. Spend the extra 5k and get the convertible version. You spend enough of your life in air conditioning already.”
— Legendary Motorsport description.

The 9F Cabrio is the convertible variant of the 9F, resembling the Audi R8 Spyder (a convertible version of the hardtop R8, in which the 9F is based on). It shares the main design with the standard, hard-top 9F, except that it has altered side intakes and the rear-engine visibility has been omitted due to the retractable roof in its place. When activated, the rear-quarter panels fold up and the roof is fold in two pieces, while a rear hatch opens and slides to the rear to let the folded roof store within a rear compartment, before sliding back to its place. The entire process is inverted when the roof is folded up.

Colour distribution is slightly altered, where the secondary one is applied on the side intake panels. Its uses the same wheel design as the regular 9F, being identical to the "Lozspeed Mk.v" sport rims available in Los Santos Customs.

The 9F Cabrio shares the exact same performance as the standard coupe 9F, having nimble handling, an AWD layout, rear engine and high amount of torque, but lacking some vital traction, even despite its AWD layout. The vehicle, however, lacks an engine model altogether, due to the roof mechanism retracting into the bay where the engine once was, this means the engine model was removed, however, it can presumed, as with the real Audi R8, the engine is still located in the rear and is lowered slightly, which would affect weight distribution.

Franklin driving a 9F Cabrio in a pre-release screenshot.

A 9F Cabrio in front of the De Santa residence during the second trailer.

A 9F Cabrio with the roof down. (rear quarter view) 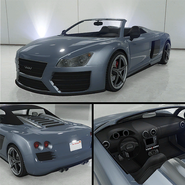 The 9F Cabrio on Legendary Motorsport.

The 9F Cabrio on the updated Rockstar Games Social Club.