Standard White - 100%
“Once you sit in this car, you won't want to drive anything else. Great in the snow. Not really, you'll probably die if you take this overpowered beast anywhere near moisture. Luckily, you live in a desert.”
— Southern San Andreas Super Autos description.

The 9F's design is heavily based on the Audi R8 Coupé, while the rear end draws visible inspiration from the Noble M600. The five-spoke alloy wheels are similar to the ones from the Ferrari 458 Italia.

The 9F features a sleek aerodynamic body typical to supercars, where the front end is dominated by the appearance of the aggressive front face, which is made up of four different air intakes, two in the central area and then one on either side. The main grille is located in the upper-central area of the bumper, its outer edges run parallel to the inner edge of the headlights and are trimmed with chrome. The Obey emblem is located just above the main central grille. The headlights are very curved and are in a two-step layout, with the inner step being less tall than the outer. The innermost edge of the headlights forms the basis for the bonnet/hood elevation lines which run to respective corners of the windscreen.

The sides of the car are fairly simple, where the upper areas are made from smooth lines and beginning from the front wheel-arch there is an impression into the main area of the body, which eventually forms the gap for the engine's air intake just before the rear wheel-arch. There is a smaller air intake located beneath the main one, on the lower edge of the body. The vehicle also features black carbon-fibre inserts for its main side air intakes. The area above the engine is dominated by two main bulges behind the seats and then in between these, there is an elevated area with slatted vents to allow more air to access the engine. Just behind the front wheel-arch, there are also six vertical chrome strips.

The rear facet of this car is completely sloped. There are two circular lamps which are used as the taillights. Beneath the tail lights there are large bumper grilles, to allow more air to reach the engine. The license plate is mounted in between these two grilles. Beneath the license plate, there is an impressed area that is low in height and central to the rear bumper. The exhaust tips are located in line with the edges of the central section of the rear bumper, the car features twin-tipped chrome exhaust tips. The 9F features discreet carbon fibre extensions and splitters running along the bottom edge of the front bumper, sides and the rear bumper.

The interior of the car in the enhanced version is very detailed, using the corresponding "Super GT" textures and dial set shared with cars like the Rapid GT and the F620. The Obey emblem can be found on the horn cap and the passenger glove compartment.

The primary colour of the car is applied on the bodywork and the stitches on the interior, while the secondary colour is applied to the rear-quarter panellings of the greenhouse area. The wheel rims are similar to the "Lozspeed Mk.v" sport wheels available in Los Santos Customs.

This sports car appears to have very high performance, in terms of top speed and acceleration. One notable aspect of the car's performance is that it has a soft suspension setup which can be visibly seen by the compression of the body into the ground when transitioning from a negative gradient to level ground. This car features large, cross-drilled brake rotors which are coupled to red brake calipers, mounted at the rear of each wheel, this combined with an AWD layout provides good traction and stability, as well as responsive handling and braking.

The engine in the rear is placed in a mid engine, all wheel drive configuration (20-80, front to rear distribution) and appears to be loosely based on a V8 cover, coupled to a 6-speed gearbox. The sound of the engine note seems to be powerful, further supported in the enhanced version, where it also shares its engine sound with the Adder. 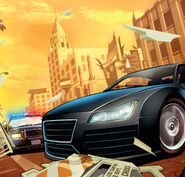 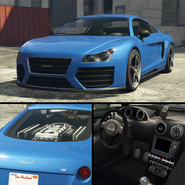 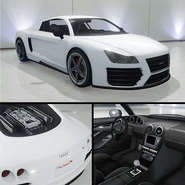 The 9F on Legendary Motorsport.

The 9F on the updated Rockstar Games Social Club.

The 9F in the cinematic preview on GTA V Rockstar Games Social Club.

The 9F in the cinematic preview on GTA Online Rockstar Games Social Club.