Standard White - 100%
“What's the difference between this and every other two-door, four-seat, six-figure coupe on the market, you ask? Well, dig down into the core stats and the answer is clear. More horses under the hood. More exhausts at the back. More road traffic fatalities, fewer convictions, and more angry bleets from teen environmentalists. The Drafter has it where it counts.”
— Legendary Motorsport description.

The Obey 8F Drafter is a sports coupe featured in Grand Theft Auto Online as part of The Diamond Casino & Resort update.

The 8F Drafter's design is likely inspired by the 2018 Audi RS5 Coupe. The overall body shape is very sleek, creating a low profile for the vehicle. The front bumpers closely resemble the 2018 RS5 coupe. However, it does not sport the big side vents on the front bumper and was replaced by a narrower intercooler vent. The main grille as well as the headlights resemble the Ford Falcon (FG X).The side profile resembles the BMW M4 CS (F82) with a character line running from the rear taillight housing to a vertical side vent just behind the front wheel. The rear exhaust and bumpers are also very similar to the M4 CS. The taillights are heavily inspired by the second-gen RS5 coupe. However, the 2018-present RS5 coupe does not have connected taillights, with it taking some inspiration from the second generation Audi A7 Sportback (Type 4K8).

The design of the car is relatively simple with sporty elements integrated to the body, where it features carbon-fibre separations above the bottom splitter and on the meshed intakes, while a chrome trim surrounds the central intake and amber signals are seen above the outer intakes. The upper area is occupied by a trapezium-shaped mesh grille that spans about half the car's width, while the areas beside it are occupied by black housings, each one containing dual headlamps, outer vertical strips and white trim around the units. The bonnet area has two body lines starting from the upper edges of the grille and run towards the base of the cabin A-pillars, along with two additional smoother lines around the centre and the manufacturer emblem embossed on the front of the engine compartment.

The sides of the car feature small exit vents with an horizontal separation finished in carbon fibre, while a body line curves from the front exit vents and run towards the rearmost edges of the tail lamps, passing through the horizontal door handles. The lower portions of the car are also defined by protruding lines, the upper one passing through the bottom of the doors and the lower ones on the side skirts. On the glasshouse area, the car bears plastic trim around the side windows and over the rear window, while two rounded mirror shells are seen near the A-pillars and a single vortex generator/fin on the roof, near the rear window. The boot area is relatively small and has a lip spoiler on the end.

On the rear end, the car features a set of tail lamps with a single red strip spanning most of the car's width, while the boot lid bears the license plate and the corresponding badges. The rear bumper is relatively bulky and houses a set of small exit vents, a small carbon-fibre diffuser with four blades and a set of dual-exit, dual exhausts beside the diffuser.

The vehicle uses a dedicated "Super2" interior, which is largely identical to the one seen in the Dominator GTX (itself being the same interior from the Specter), except for the vented section on the front of the dashboard, under the windscreen. The Obey logo can be seen on the horn cap.

The primary colour of the car is applied on the body, while the secondary colour is applied on the lower splitter and interior stitching. It uses a unique set of split five-spoke rims with small bifurcations on the ends and small additional spokes on each main spoke. The rims also have a black finish with an additional colouring around it (although only models generated in the Content Creator or obtained from the Lucky Wheel will have the default white colour).

The 8F Drafter is a very high-performing car in the sports category. It lacks top speed but makes up for its loss by having a superior acceleration. Braking is also one of the best in the sport category. Handling on the car is even in parallel with some supercars. It is highly recommended to obtain this vehicle if the player decides to race in the sports category as it has superior performance compared to other vehicles in this class.

The 8F Drafter has one (the eleventh) Advanced Flag enabled.[1] The purpose of this flag is unknown, but it appears to have little impact on performance.

Theb8F Drafter is powered by what appears to be a V8 engine (based on the cover), coupled to a 6-speed gearbox in a front engine, all whell drive layout (40-60, front to rear distribution). Its engine sound is loud, somewhat similar to the one found in the Schlagen GT.

Official screenshot of the 8F Drafter. 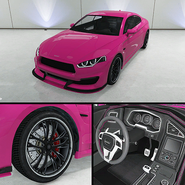 The 8F Drafter on Legendary Motorsport.

The 8F Drafter on the updated Rockstar Games Social Club.

The 8F badge seen on the Obey Stripes livery. This badge is, however, not used as a badge on the vehicle. The 8F text also matches the style of the 9F text. 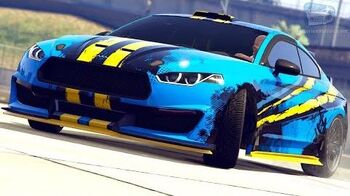