An 811 in Grand Theft Auto Online.

“Meet the future of hybrid tech: Pfister took billions of dollars in subsidies for low-carbon research and used it to refine an electric motor until it gives more kick than a turbo charger. And don't worry about accidentally investing in the environment: the assembly process alone produces enough CO2 to offset two thousand acres of otherwise useless rainforest. Win-win.”
— Legendary Motorsport description

The Pfister 811 is a two-door hypercar featured in Grand Theft Auto Online as part of the Further Adventures in Finance and Felony update, released on June 28th, 2016, during the Pfister 811 Week event.

The 811 is mainly based on the Porsche 918, seen prominently in the overall body shape, front curvature and rear engine bay cover, while the rear fascia and rear lights are based on the Koenigsegg Regera. The spoiler is inspired by the Lotec C1000.

The car assumes a long, aerodynamic profile with curved shapes around the front and rear sections. On the front fascia, there is a carbon-fibre splitter that spans the whole width of the car and has small fins on the front quarters of the vehicle. There are three grilles in the bumper area, the central one featuring a plastic/carbon-fibre surrounding with an horizontal separation intended for the radiator, while two small intakes are seen in front of each wheel, intended for general airflow and cooling of the vehicle's front disk brakes. Directly above the bumper are the twin frog-eye headlamps located in black housings, as well as an inset section on the bonnet area.

The sides of the car make use of curvatures above the wheels, while the portions around the wheel arches are flat. Down the side of the vehicle is a curve progressing from the bottom of the front fender, which leads into a narrow, vertical side intake to cool the rear engine and brake pads on the rear axle. The cabin area makes use of small mirror wings mounted on the doors and plastic fittings around the windows.

The rear section is predominated by the rear clamp, which hinges from the roof and has a small rear window for the cabin. The car distinctively features two exhausts positioned directly behind the cockpit, closely behind the rear spoiler made up of CFRP. The same exhausts are housed within a carbon-fibre cover, which bears five ovular ventilation holes with mesh grilles. The rear spoiler forms as part of the aforementioned side curves, which pass over the rear arches. The rear fascia, similar to the Furore GT, is based within an inset arche, though it is finished in carbon fibre. The curved rear light units can be seen positioned below the rear duct, with the manufacturer labeled in chrome lettering in between them and the license plate located on the middle of the car's rear fascia. Beneath the inset arch, there is a 6-bladed carbon-fibre diffuser, which is positioned in between the two rear quarter panels, and curves from the sides of the vehicle. The underside uses a carbon-fibre plate covering the area between the axles.

The interior of the car reuses the same dials and details from the Comet, another Pfister car. However, the area below the windscreen is much larger than the aforementioned car. The Pfister logo is also seen on the horn cap.

The vehicle may spawn with or without a roof, although one can modify it through a mod shop to install/remove it at their desire. The primary colour of the car is applied on the main bodywork and the interior stitching, while the secondary color is applied on the cabin, roof and the surrounding of the engine bay. The car has seven-spoke split alloy rims.

The 811 performs phenomenally. With a light body, all-wheel drive, and great aerodynamics, the car has extreme acceleration, beating all motorcycles and non-electric supercars. According to files, the vehicle's top speed is on par with the T20, being the joint third-fastest car in the game (according to raw-data in the files). In reality, when observed, the 811 is even faster than the X80 Proto, Adder and even the Banshee 900R. In other words, the 811 is observably the fastest supercar in the game. This makes the 811 extremely competitive on races with long straights. Despite this impressive straight line performance, the 811 is appalling to maneuver in the corners, as at even low speeds for a supercar, the 811 massively understeers when approaching the corner, while applying power coming out of the corner causes oversteer and loss of gears. The car also suffers from extreme traction loss, making it a difficult car to drive in Stunt Races as well. This makes the 811 a vehicle best suited for races with extremely long straights and very long corners where it can easily reach top speed and not lose much in the corners.

The car's rear-engine layout seems beneficial in terms of power-to-weight ratio. The car is given a unique engine sound that seems to be a cross between the sound of the Monroe and a higher performance car, giving it a lower number of revolutions than expected and thus a lower pitch sound. The low rev speed doesn't mean the car suffers in power, however; off the line, the car still remains impressive, and backfiring seems less common than on other supercars, seemingly making the 811 more economical. The website claims that the vehicle is a hybrid, like the real-life Porsche 918, and that its electric motor "gives it more kick than a turbo charger". The car's electric motor counteracts speed loss when shifting. 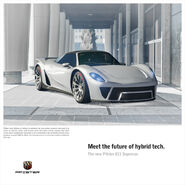 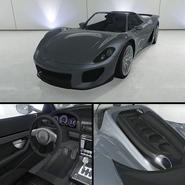 The 811 as seen on Legendary Motorsport.

The 811 on Rockstar Games Social Club.

The 811 on the updated Rockstar Games Social Club.

The 811 in the cinematic preview on Rockstar Games Social Club.